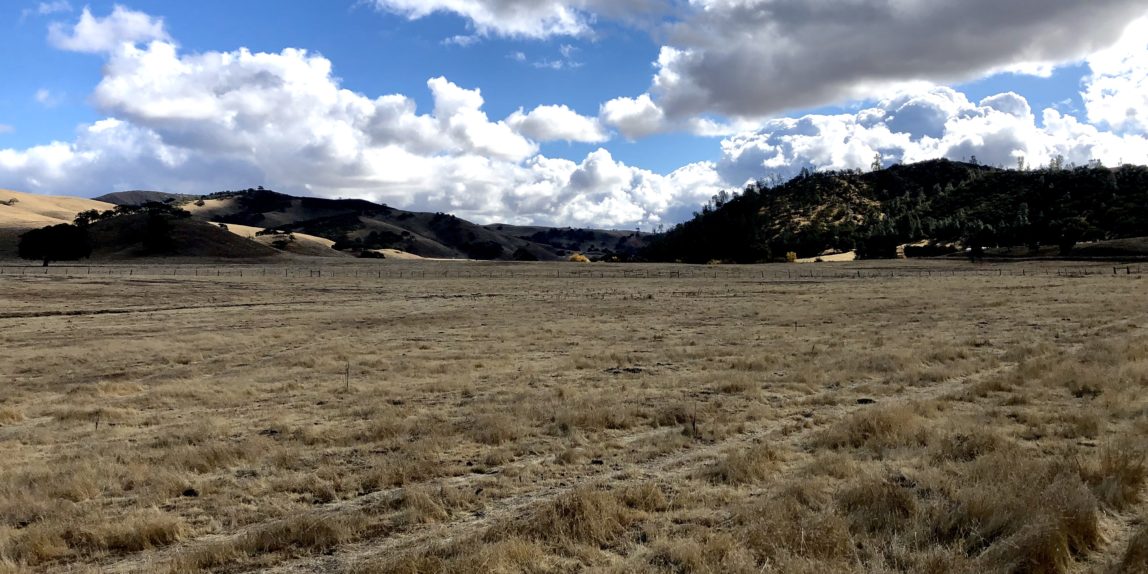 I, for one, am thankful for all of you coming along on this journey with me.  You may think you’ve been simple observers, but that can’t be further from the truth.  It was because of you that I was able to stay focused and think about everything I encountered.  It wasn’t just “oh, look at that beautiful valley.”  It was thinking about what made that valley beautiful and describing it in words so you could be there with me.  Not to mention that traveling alone can be lonesome, but I never felt alone on this trip.  So, thank you!

This morning I woke in Pinnacles National Park, to a campsite that was completely isolated from the others. 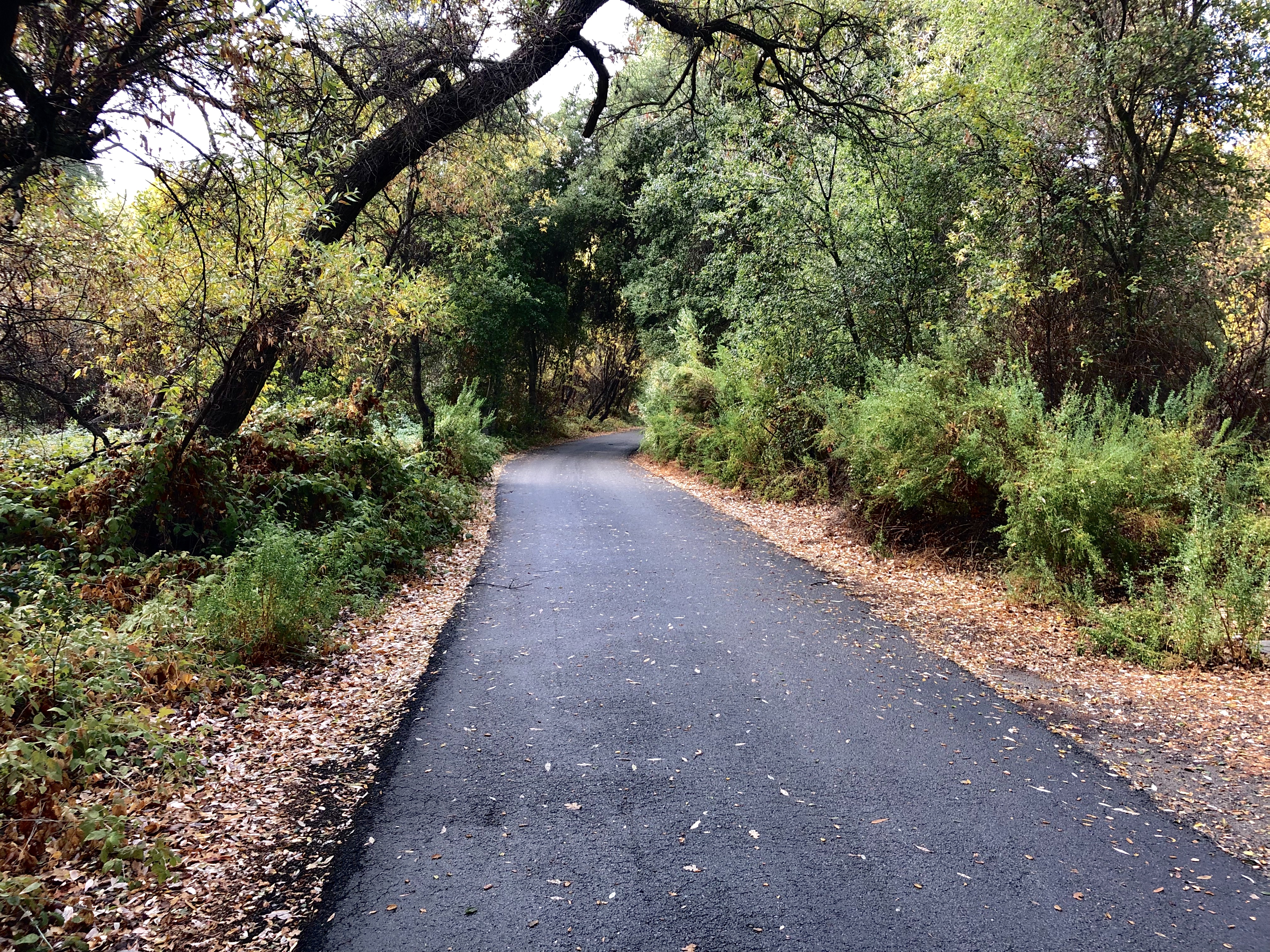 I wasn’t in any particular rush to get home, but I did want to catch the light before the rains began again.  It was a spectacularly beautiful morning, with huge billowing storm clouds cutting shafts in the sunlight.  The sunshine that did make it through the thick barrier shown down on the forest trees, highlighted all the colorful leaves. 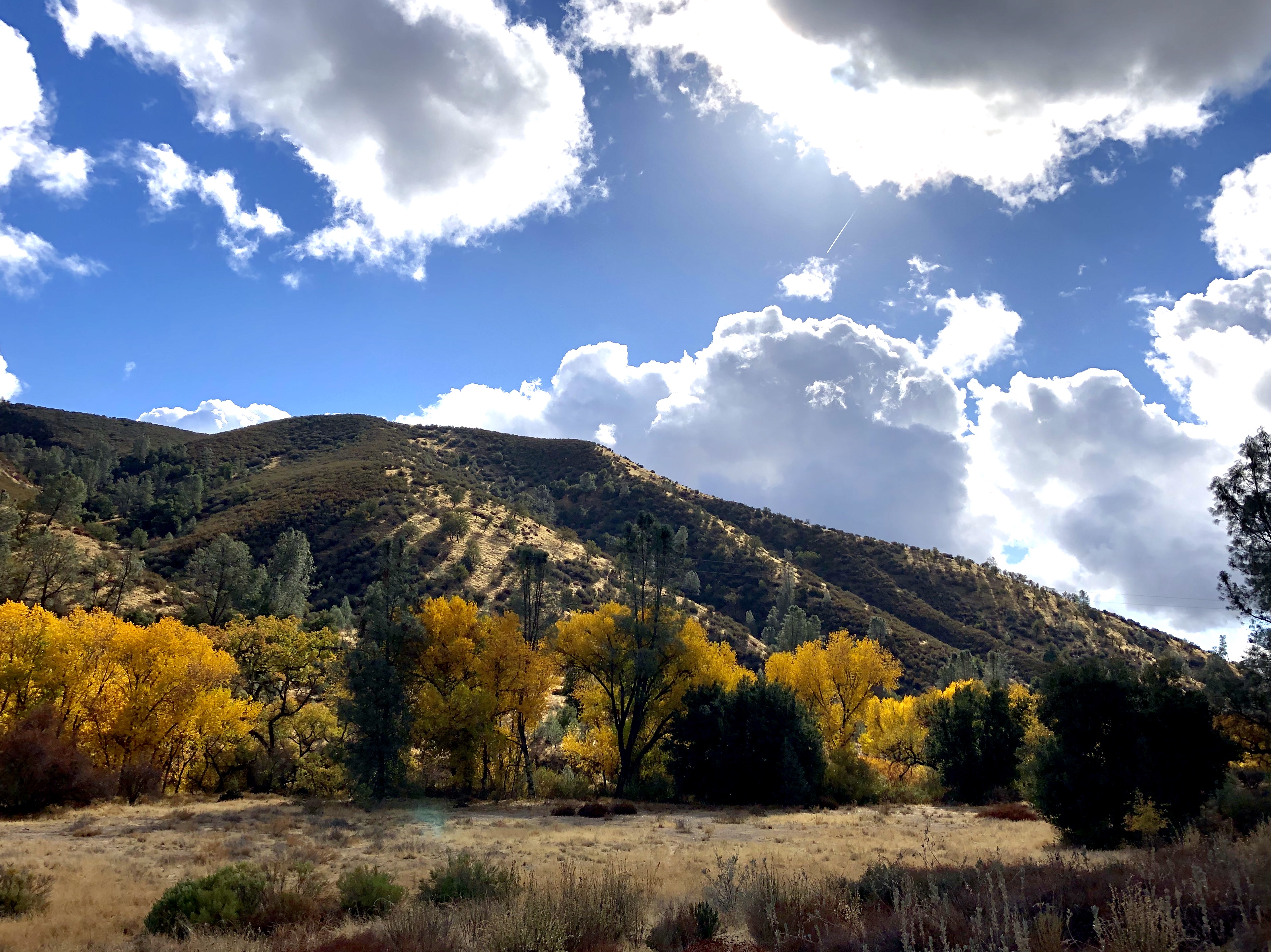 After all this time traveling, hoping there might be some seasonal color changes I might catch, it turns out I needed to look no further than California.  Right here in my back yard were the gold, orange, and red leaves, just preparing to fall as winter was quickly making its way west.  For now, though, it hadn’t made it here, so I was able to enjoy a cool damp fall morning. 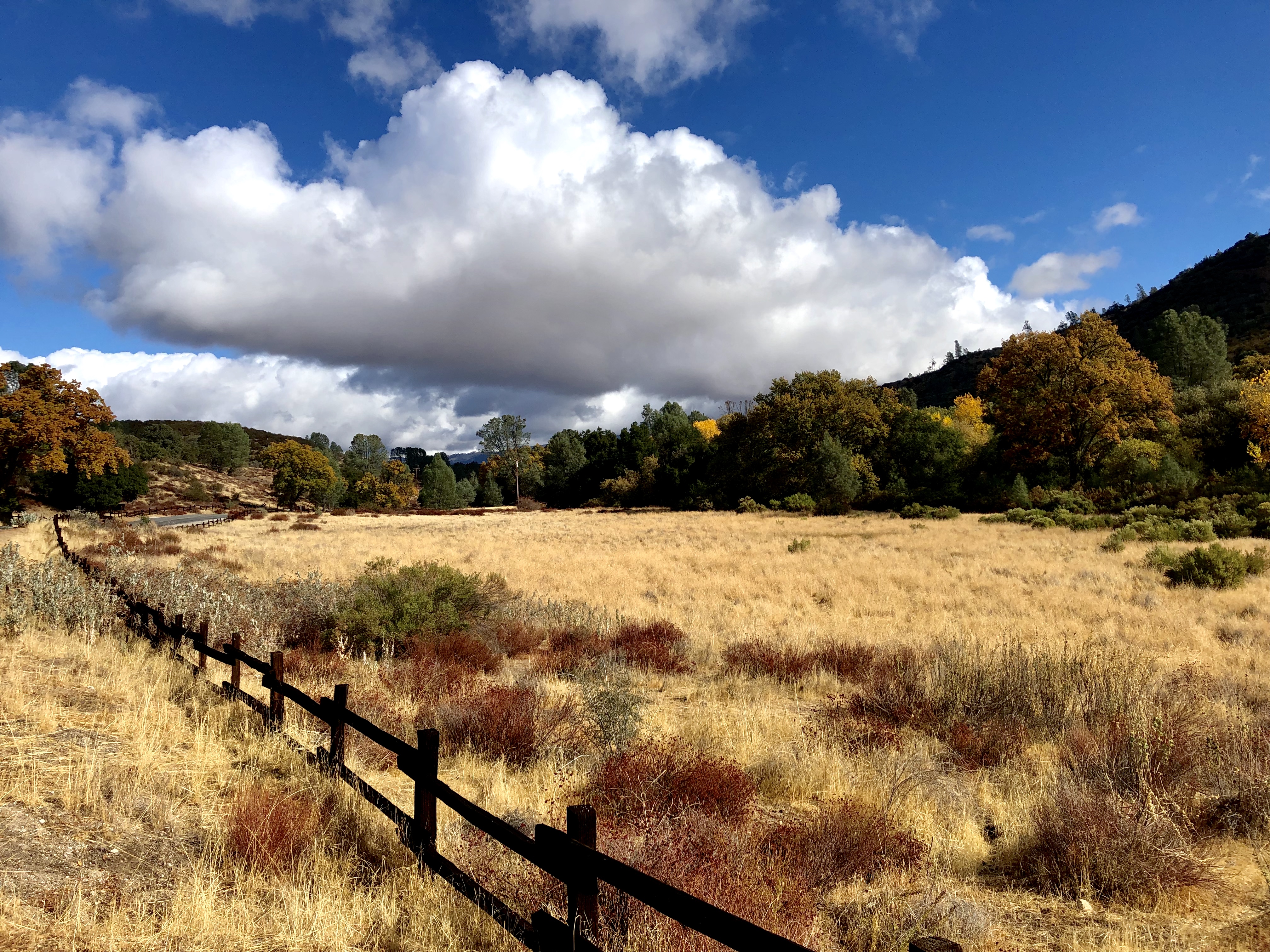 While I was hoping this rain would clean off my car and trailer, it really just added another layer of muck, so everything will need a good scrubbing when I get home.  I loaded up the car and left the campground.  Before starting on my way home, however, I wanted to see the Pinnacles.  I mean, I had driven all this way it would be silly to not see them.  Can you see them in the background below? 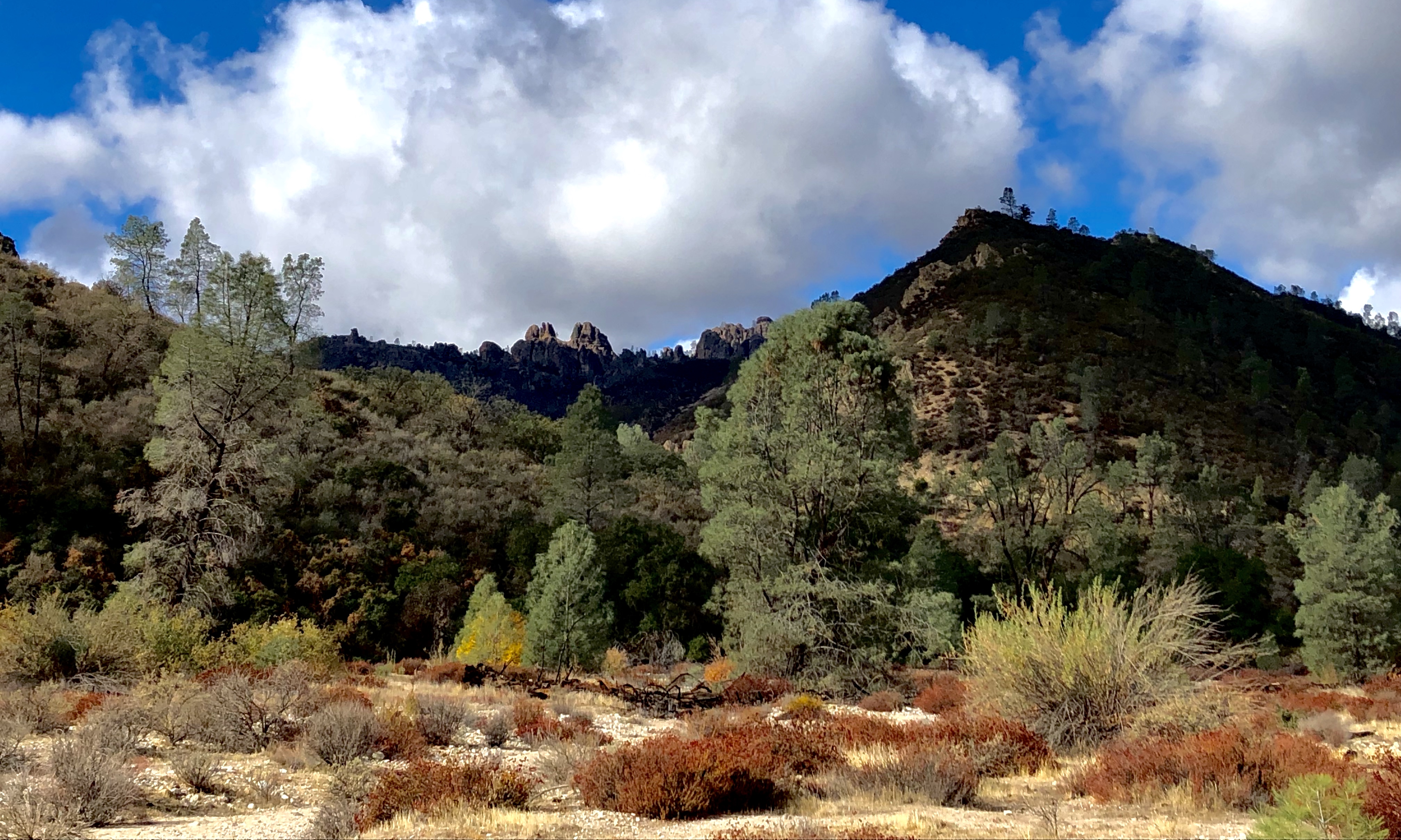 Yeah, not the best picture.  Unfortunately, with a dog I can’t hit the trails, but I’ll be back to get a closer look.  I had no idea, but Pinnacles is only 2 hours from San Francisco!  Considering I’ve been driving an average of 5 to 7 hours every day, that’s practically within the same neighborhood as my house.

Finally, after a little driving tour of the park, we left and began the trip home.  The storm clouds hadn’t opened up yet, so the countryside was illuminated by crisp clear sunshine, and shadowed by thick impending clouds.  It was the perfect day to take pictures! 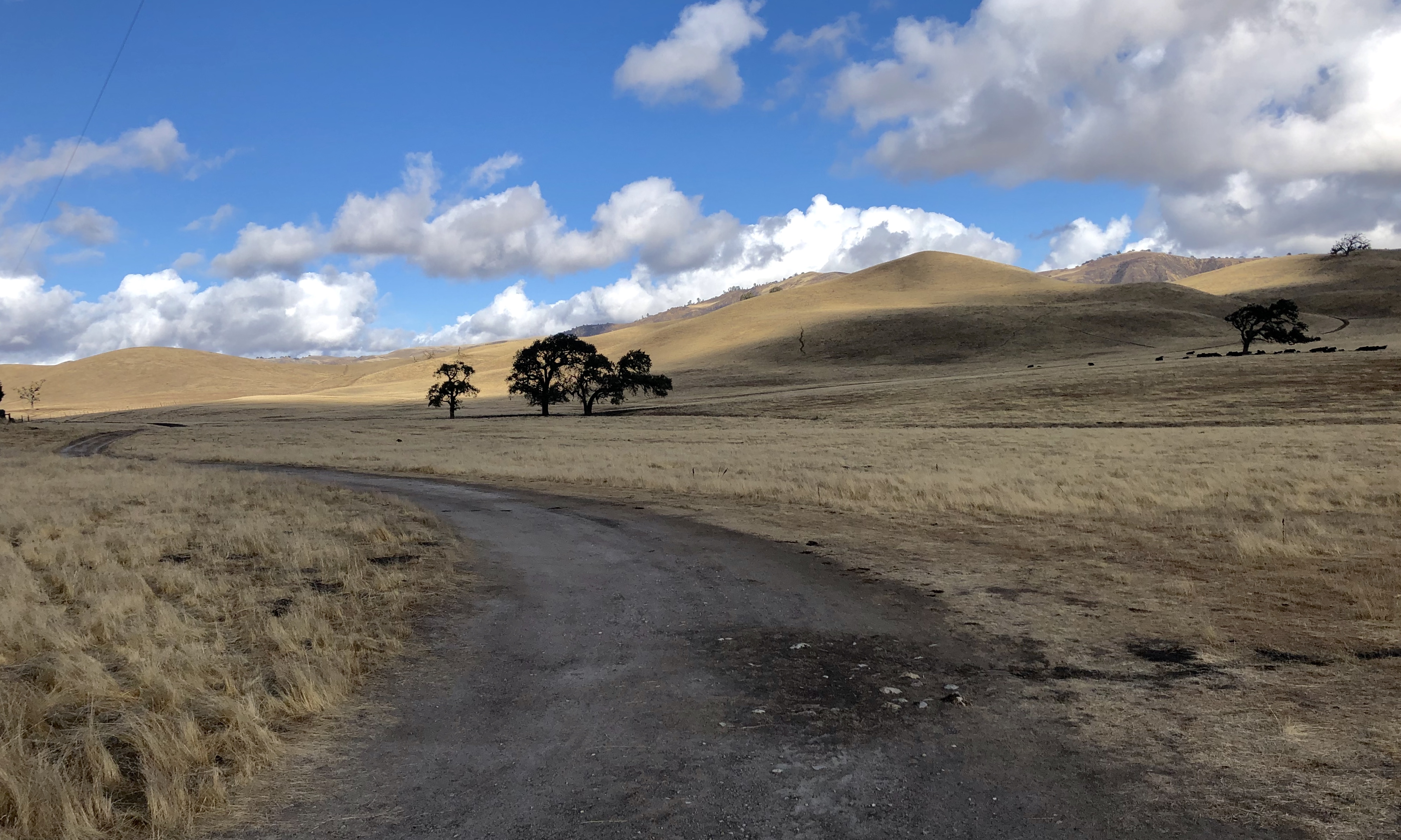 Most of the drive was through the hillsides that separate the central valley from the coast.  When I was a kid we would drive from Fresno to Santa Cruz every summer for vacation.  I remember looking at the hills and imagining that underneath the thick layer of dirt were sleeping giants.  If you looked closely enough, you could see the outline of their bodies, slumbering away, with a blanket of golden grass keeping them warm. 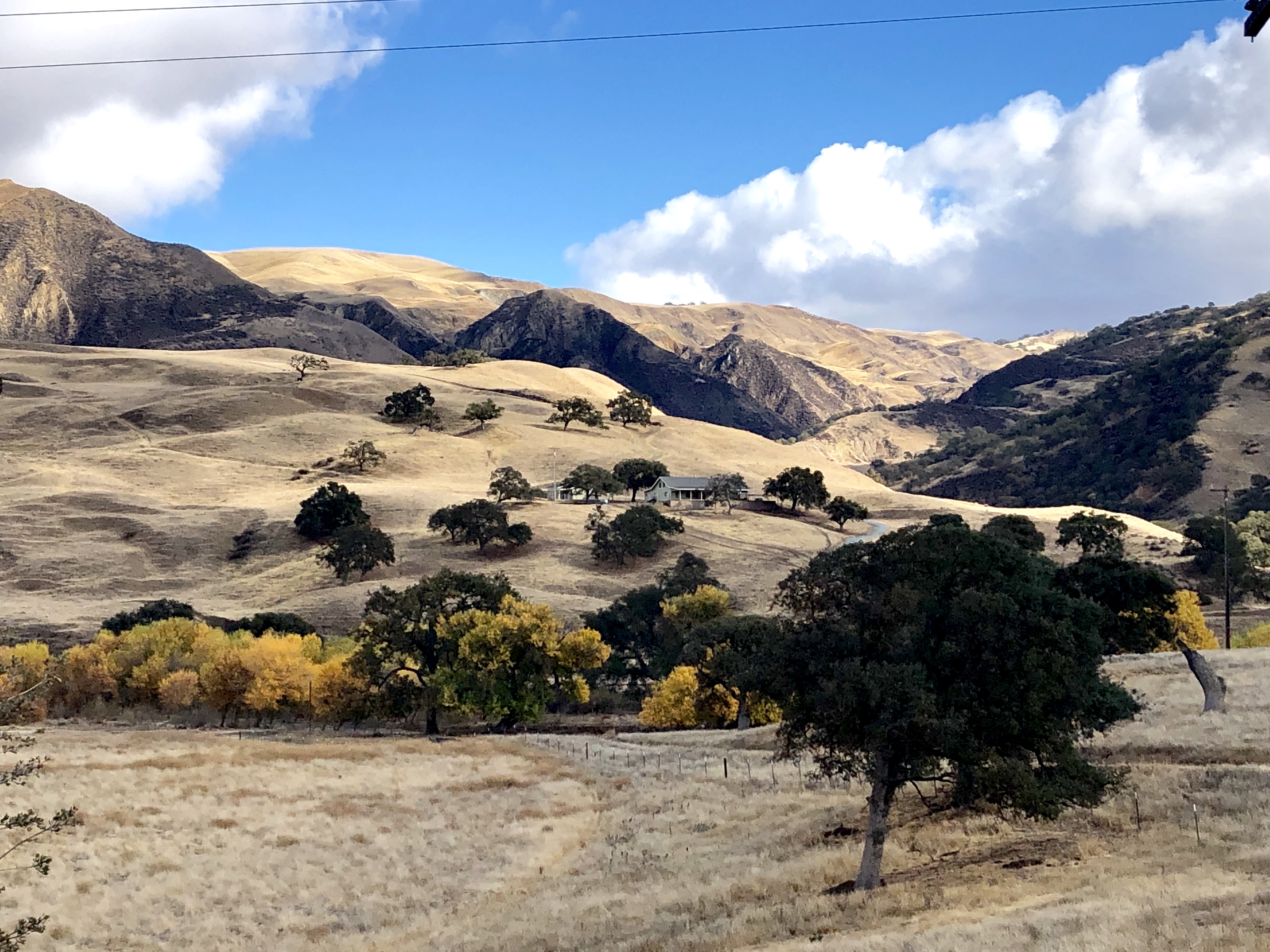 Soon enough the hills faded into the background and I was back on the highway headed home.   Dingo knew exactly where we were going, and her eyes lit up with anticipation. 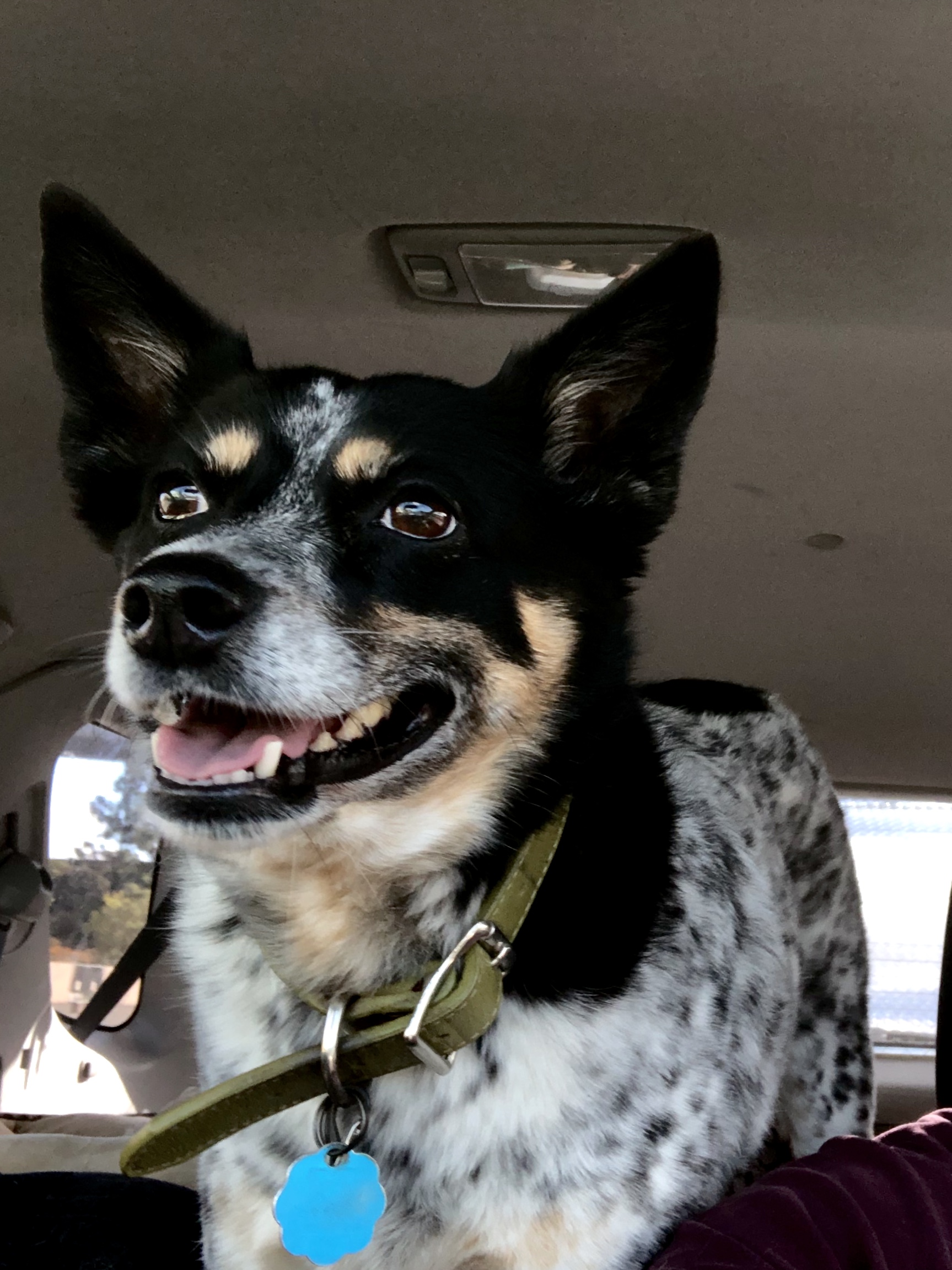 This was the moment I had been dreading.  What if, after all this, the trailer doesn’t fit in the garage?  What if it does fit, but my car won’t fit with it?  San Francisco has a horrible auto break in problem, so I’m very motiviated to get everything into the garage.

As I arrived with my trailer, my housemate Rachel met me to help guide me into the garage.  My newly developed trailer driving skills came in handy as I successfully (on the third try) backed the trailer up to the garage.  I unhitched it and began pushing.

Amazingly the trailer fit through the door! 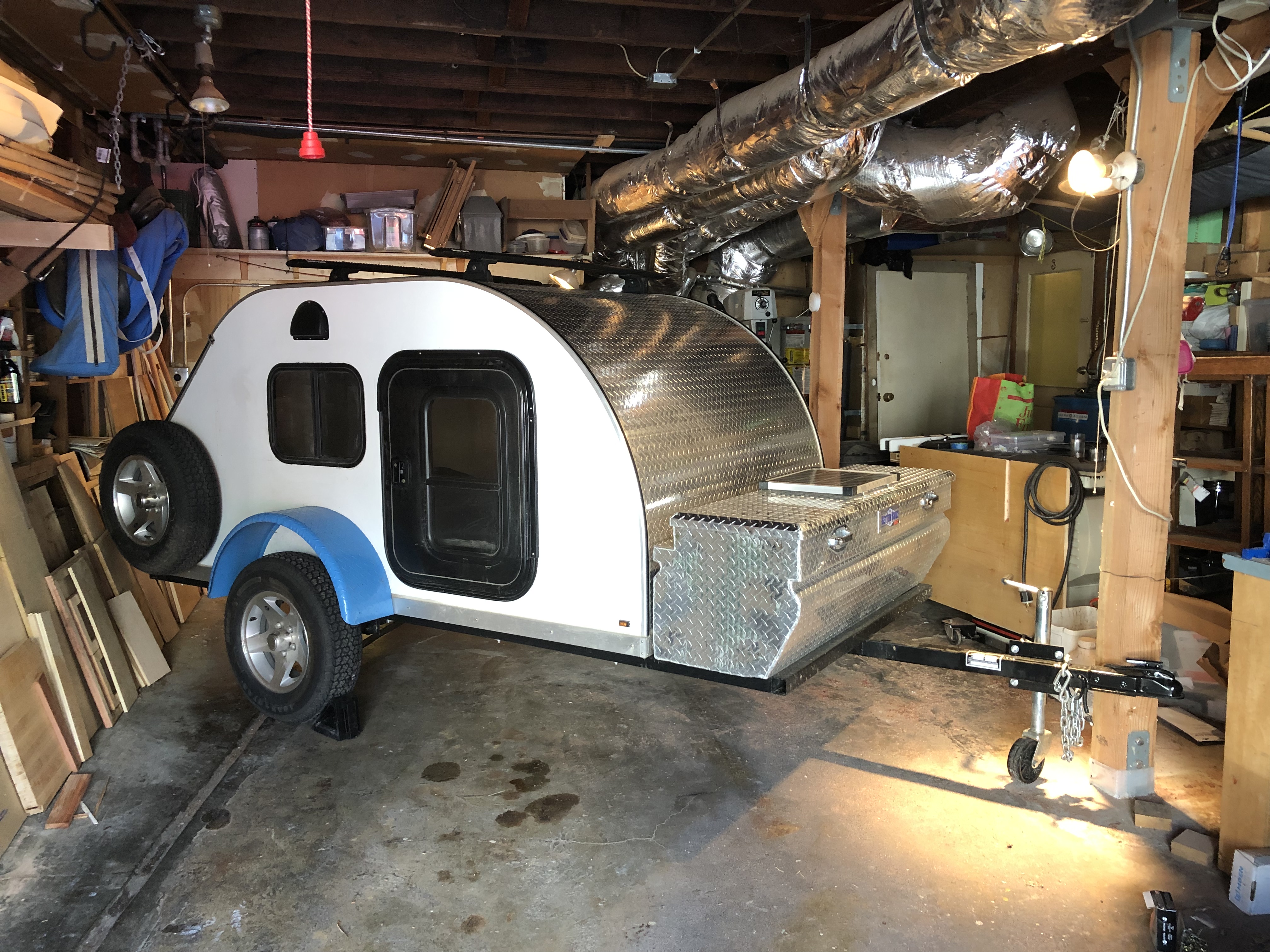 I kept pushing and trying to turn it enough that my car would also fit.  Alas, a pretty vital post that is holding up my house is in the way.  I wiggled things back and forth, moved a few work benches and got as close to the post as possible.

From there I tried to pull my car in.  I got it close, checked…not enough to close the garage door.  Got it closer and checked again, not enough.  It felt a little like trying to close luggage by sitting on it after overpacking for a trip.

I turned my car slightly to the left and scooted up until I was nearly touching the trailer. 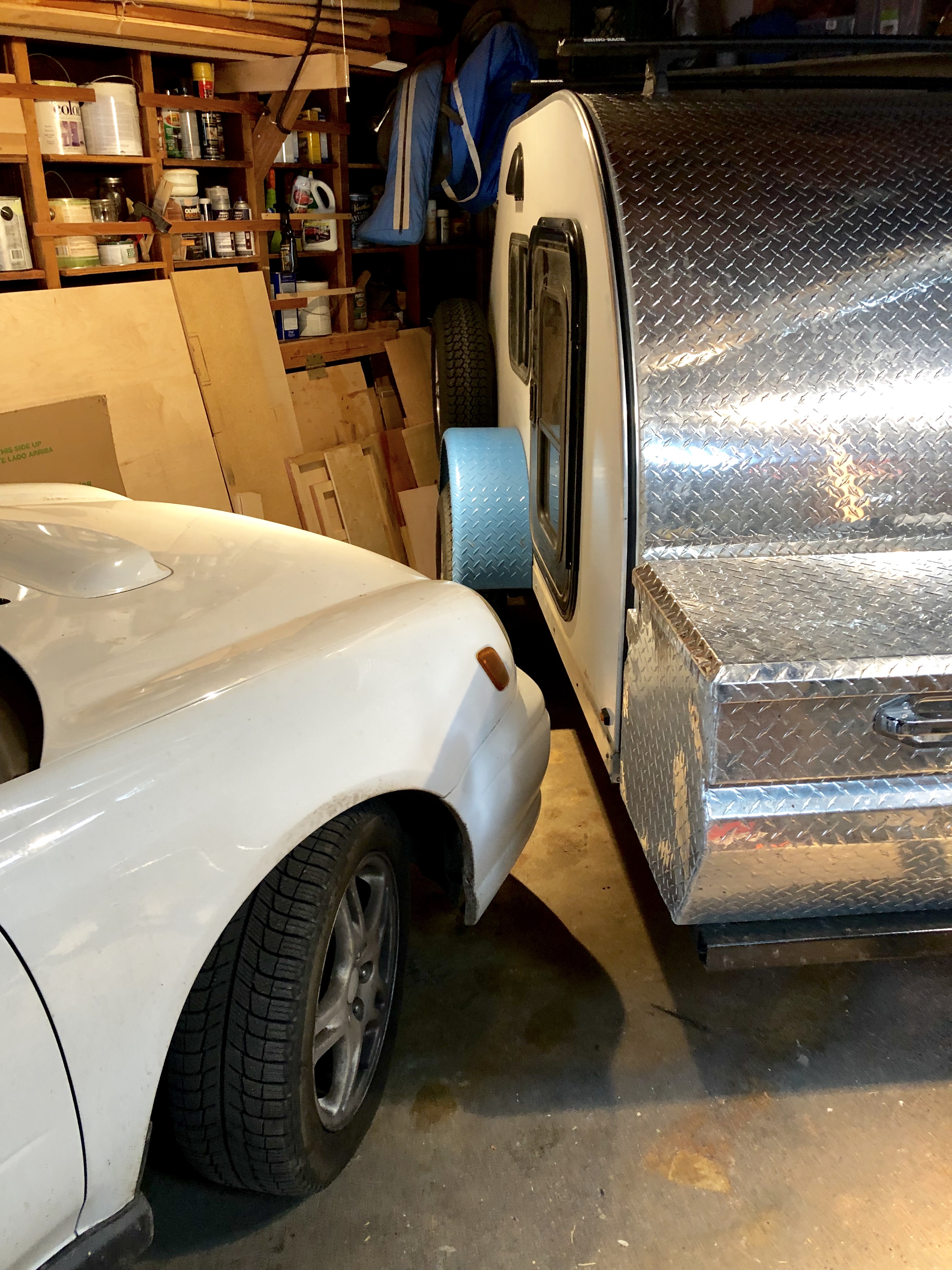 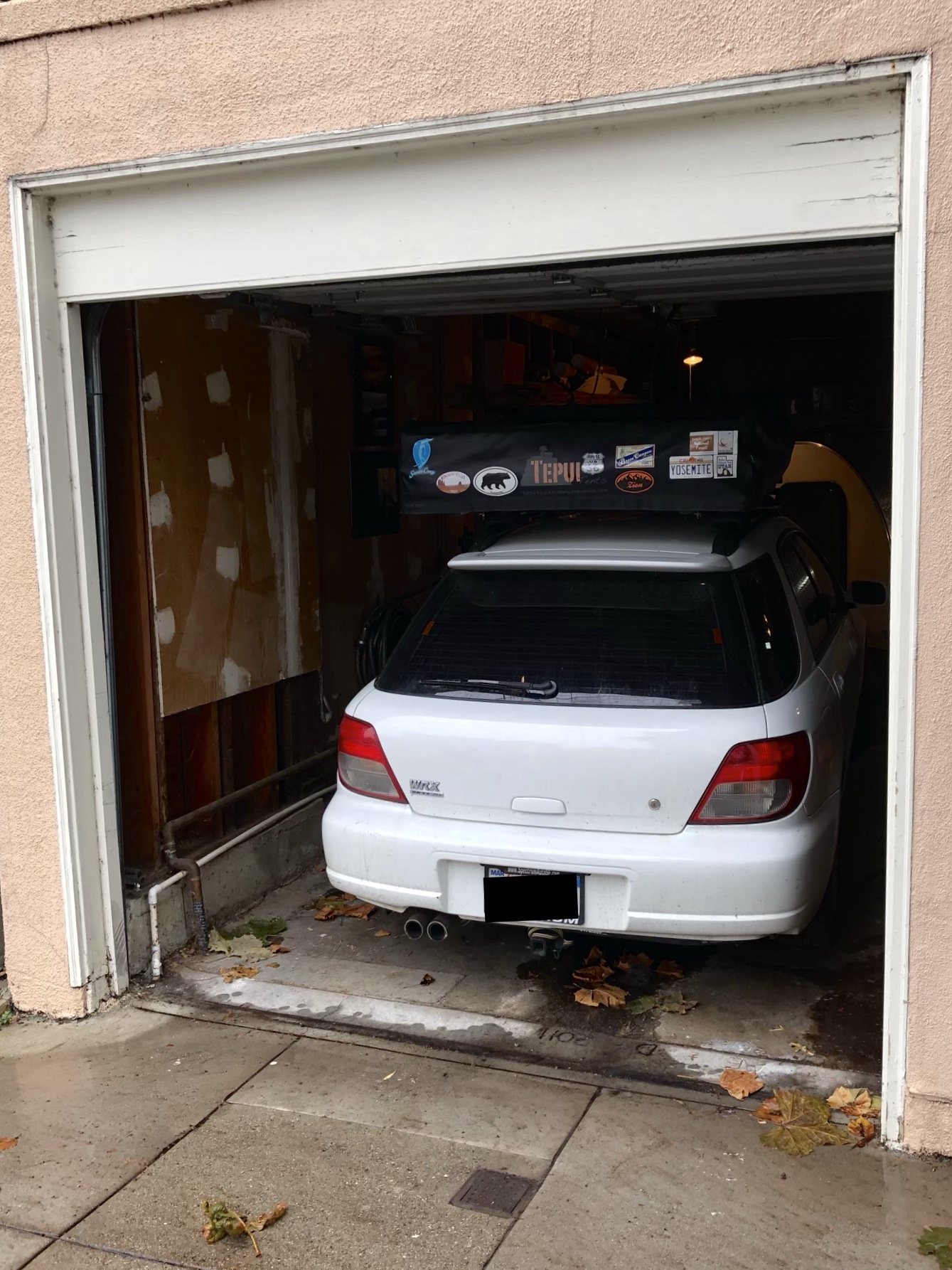 In retrospect I think I could have turned the trailer the other direction and it would have fit much better.  I’ll be playing around with the configuration, but purely from a proof of concept standpoint, it works! Everything can live safely and warmly in my garage.  Protected from thieves, vandals, and the elements.

I can’t emphasize how much this has been weighing on me.  I had dreams about it over the last two nights while camping and was stressing about it before even leaving on this trip.  I had to keep telling myself, “It will be fine.  I’ll make it work.” But those were just words to reassure myself.   I can now breathe a sigh of relief knowing everything fits.

With everything safely tucked away, my car unloaded and the laundry spinning, I’m able to take in everything I’ve experienced.  I intend to post another entry going through some of those revelations, including what I’ve finally decided to name my trailer.  I won’t tell you yet, though.  You’ll have to come back for more!

Have a wonderful holiday weekend everyone! 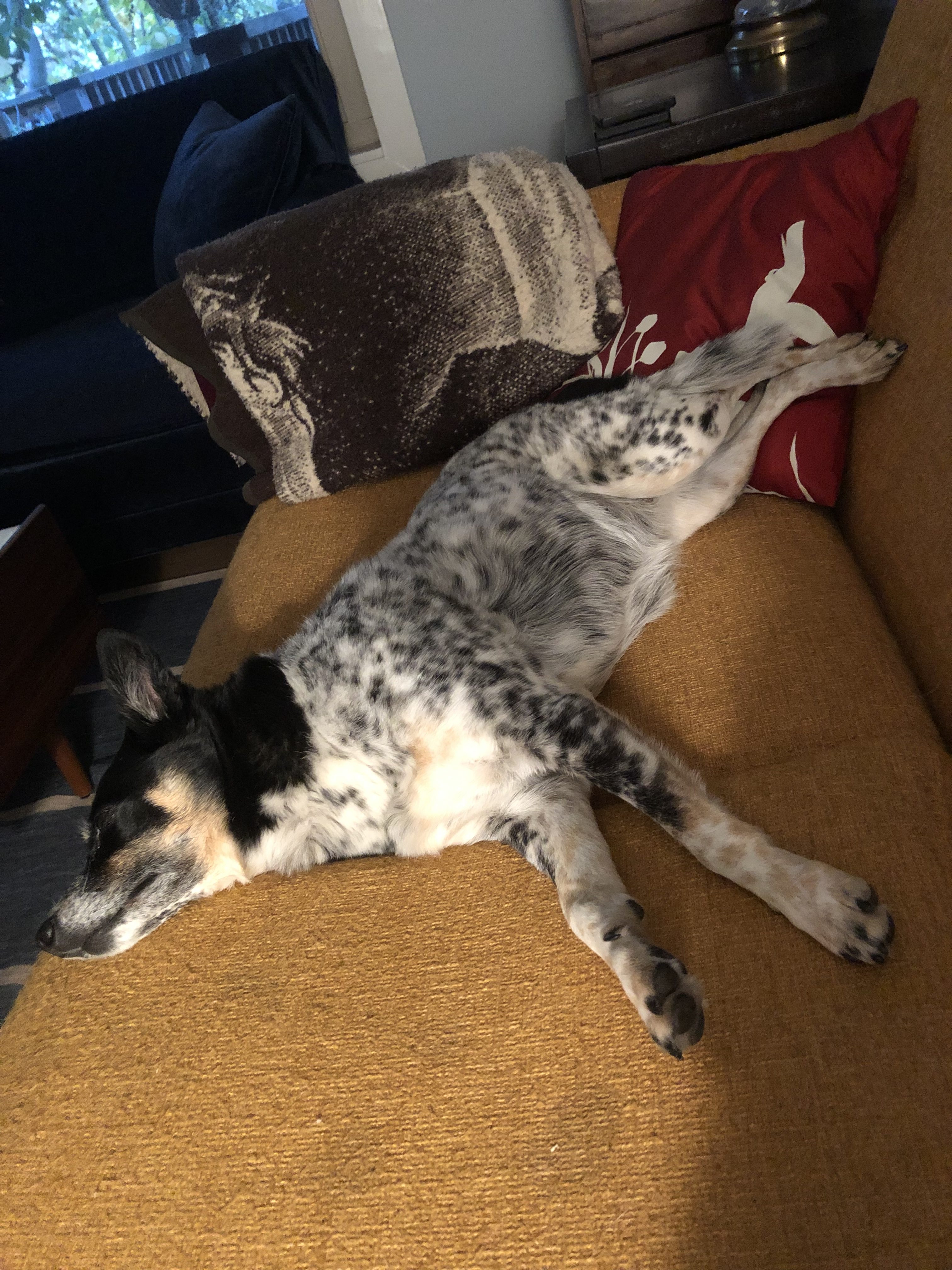