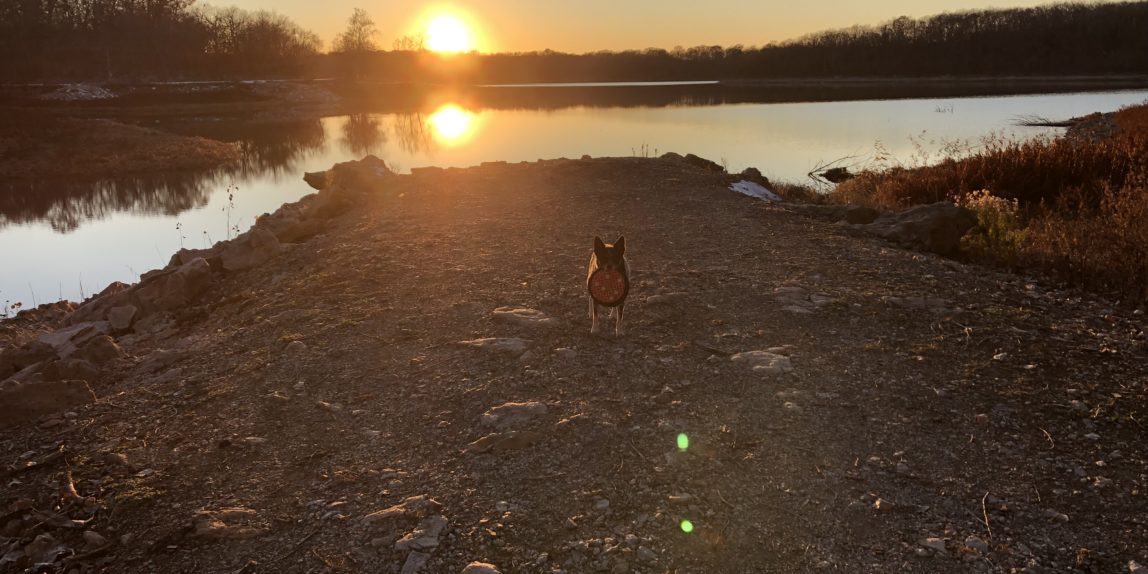 Dingo and I woke to frost covered windows after the best camping rest I’ve ever had. This queen sized mattress is a game changer! At first I though it was foggy outside, then I realized that the condensation from our breath had caused all of the windows to freeze on the inside of the trailer. It was as if I were a superhero and could freeze anything by breathing on it. I threw on some boots and ventured outside. I thought for sure it would be warmer given the freezer-like status of the trailer, but was reminded that it’s just as much winter outside of the trailer as it is inside.

To emphasize the point, this was what I had encountered yesterday afternoon while driving to this campsite.  Yup, that’s corn. 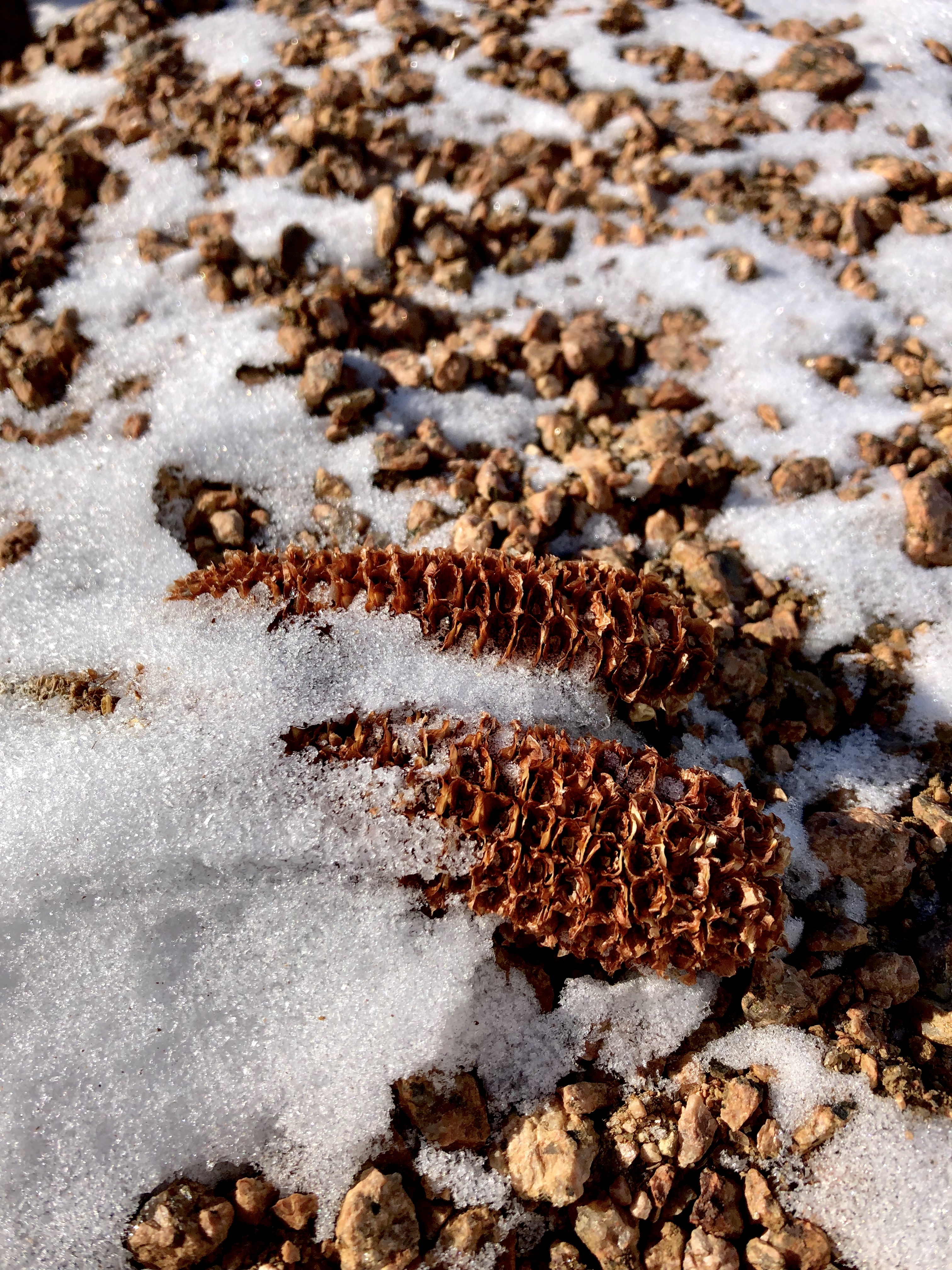 Dingo and I were lake side, surrounded by a forest of trees that looked naked and cold without their insulating leafs. When we arrived late last night it was so dark the open campground absorbed the light from the car headlights. There was no landscape beyond small wooden posts indicating a campsite, and no orientation beyond the glittering stars overhead. After the last number of days driving for 8 or 9 hours, all I really wanted to do was crawl into the trailer and go to sleep.

When we woke up and I saw the beauty that surrounded us I was tempted to stay another night at this campground. I knew Dingo was as exhausted as I was after all that driving. That said, there was little to do at this lakeside retreat, and I was more tired of being cold than I was of driving. So I packed up the car and we headed out. 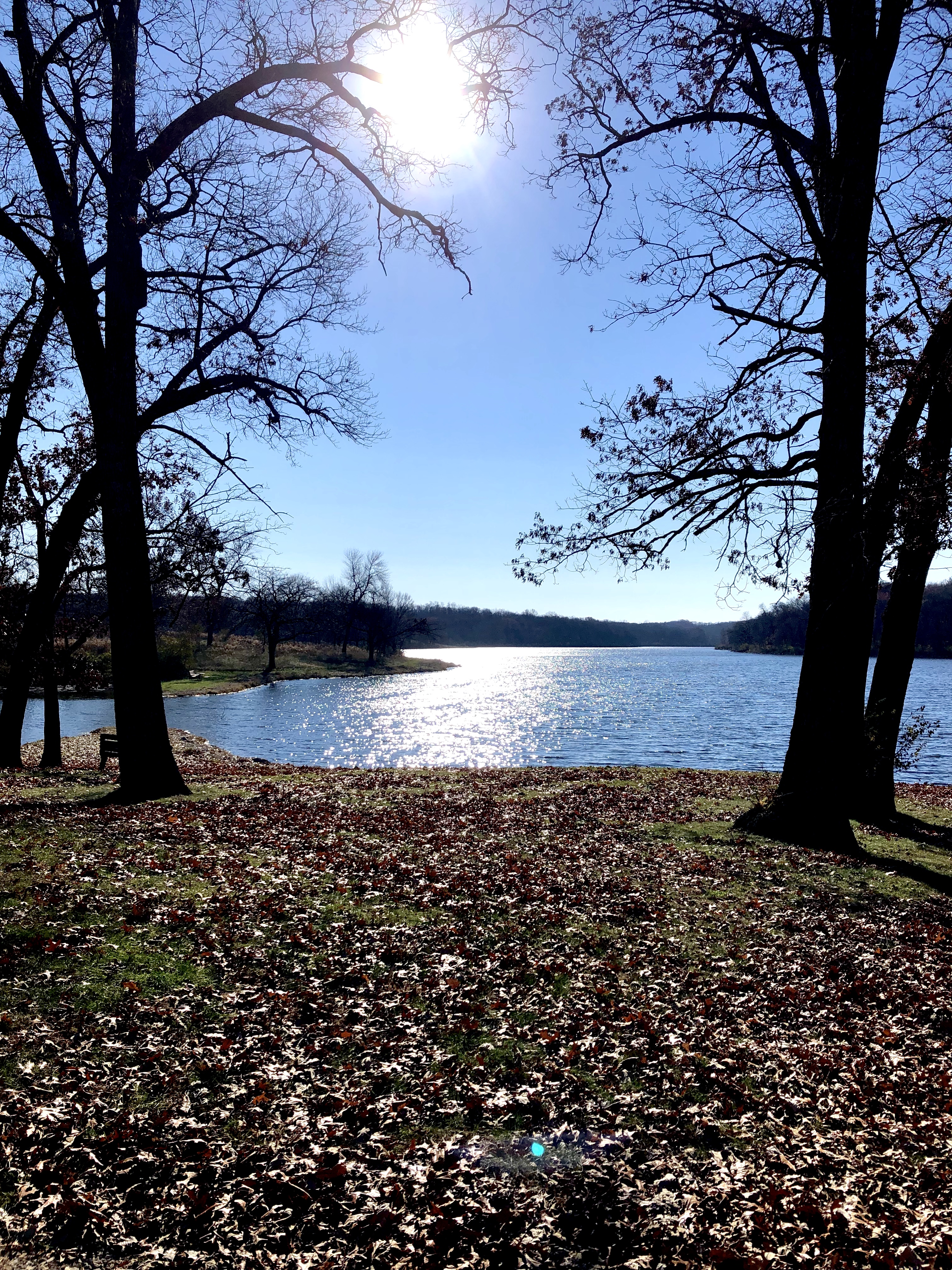 Given that the primary motivator of this exodus was to escape the cold, heading back into Nebraska and Wyoming seemed counter productive. I had planned this trip out with plans and backup plans, but none of those plans took into considering escaping the cold. I didn’t want to get another hotel, which is inevitably what would have happened if we kept heading north west, so I made an executive decision. We’re going south! As far south and as fast as we can go! I didn’t have a destination in mind beyond someplace warmer. The freedom was simultaneously liberating and moderately stressful, but I decided to focus on the liberating.

It’s interesting what happens when you don’t have a schedule and you don’t have a destination. All of a sudden anyplace can be your destination and anytime you want to stop you can. I had forgotten about this feeling of freedom with such a precise target, in both location and timing, for the first portion of my trip. I had been so aware of needing to be in Wausau at a certain time that I hadn’t strayed from my predefined path. Now, I had no path.

So as I coasted down the freeway, first through Iowa, then through Missouri, and finally into Kansas, I took in every sight. I imagined growing up on one of these farms, with rivers and wild life at my finger tips. No playground built by hand would ever be able to compare with that built by nature. I pictured myself as a child, building a fort in a place where people once lived in actual forts. I would hunt for arrow heads in the woods, build dams in the river, and create elaborate stories for my action figures to act out. This country, quiet and empty to some observers, was filled with simple natural beauty and endless opportunities for a kid with an active imagination. 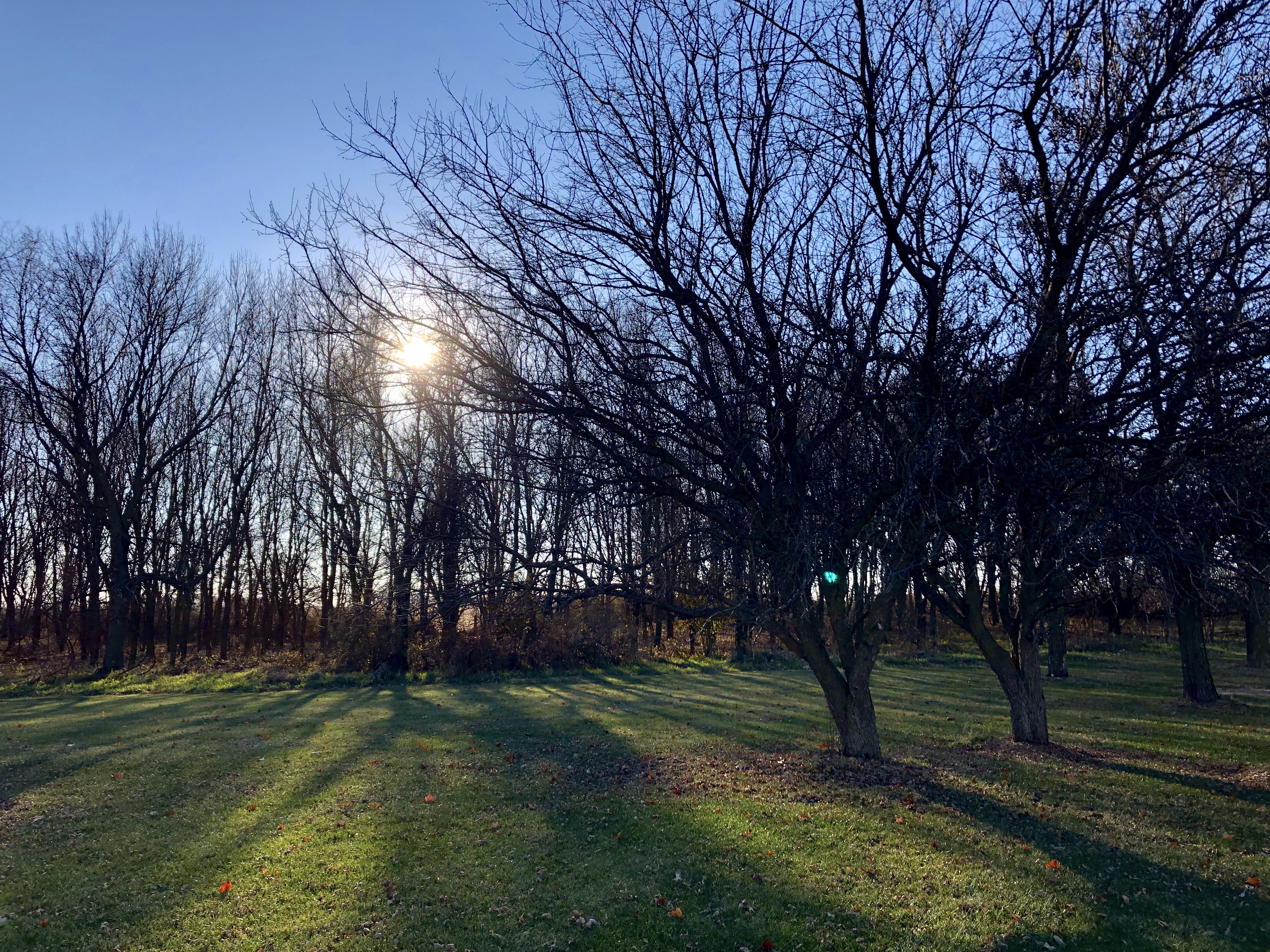 After about 5 hours of driving Dingo and I stopped for gas in Lawrence Kansas. As the car filled up I Googled Campgrounds in the area. There were a few options, which was great, but the one that stood out was the Gaea Retreat. I didn’t spend much time reading about it. It had a good ranking, was nearby, and the pictures were of a beautiful lake at sunset. It looked perfect.

Google maps led me through rural Kansas, past towns where the largest building was either the church or the Army Reserves office. Abruptly my nicely paved road turned to gravel and went deeper and deeper into the hills. The houses faded away, the signs of humanity faded away and my self preservation started to kick in. Finally my gravel road turned onto another gravel road and I went through a large fence with a roughly painted signed titled “Gaea Retreat.” A little past the large fence was another sign that reminded visitors that clothing was required in that area.  I’m no prude, but this wasn’t exactly what I had been expecting. My mind went three places. First it went to “someone could easily lock that gate and I’d be trapped here.” Then it went to “I’d be trapped here with naked people.” Then it went “what if those naked people are murderers?”

Assuming I was overreacting, I parked and walked up to the registration building.  Pieces of the walls, roof and door all had chunks missing, like it was a cookie being eaten one bite at a time. No one was there to greet me, which I found somewhat relieving. By this point I’d all but decided that this was not someplace I intended to sleep, but taking in the surrounding area sealed the deal. There were recycling bags and trash that hadn’t been disposed of in what appeared to be months, if not years. There was no lake that I could see, and in the distance a very angry dog was alerting the property owners of my presence.  In retrospect, I should have shuffled through the pictures before selecting this destination.  I’m pretty sure this picture would have told me everything I needed to know: 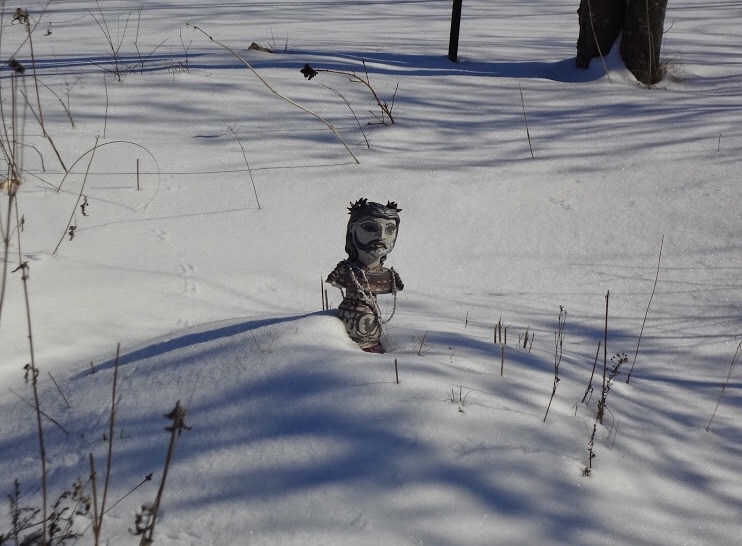 I hopped back into my car and after performing a 25 point turn trying to maneuver my rig to point in the outward direction, Dingo and I fled the site and headed back down the road. I returned to Google despite it’s attempt to lead me astray, and gave it one more opportunity. I returned to my campground search and found Leavenworth State Fishing Lake was just a few miles away. After a short 15 minute drive we were there and I couldn’t be more astonished by what I found. 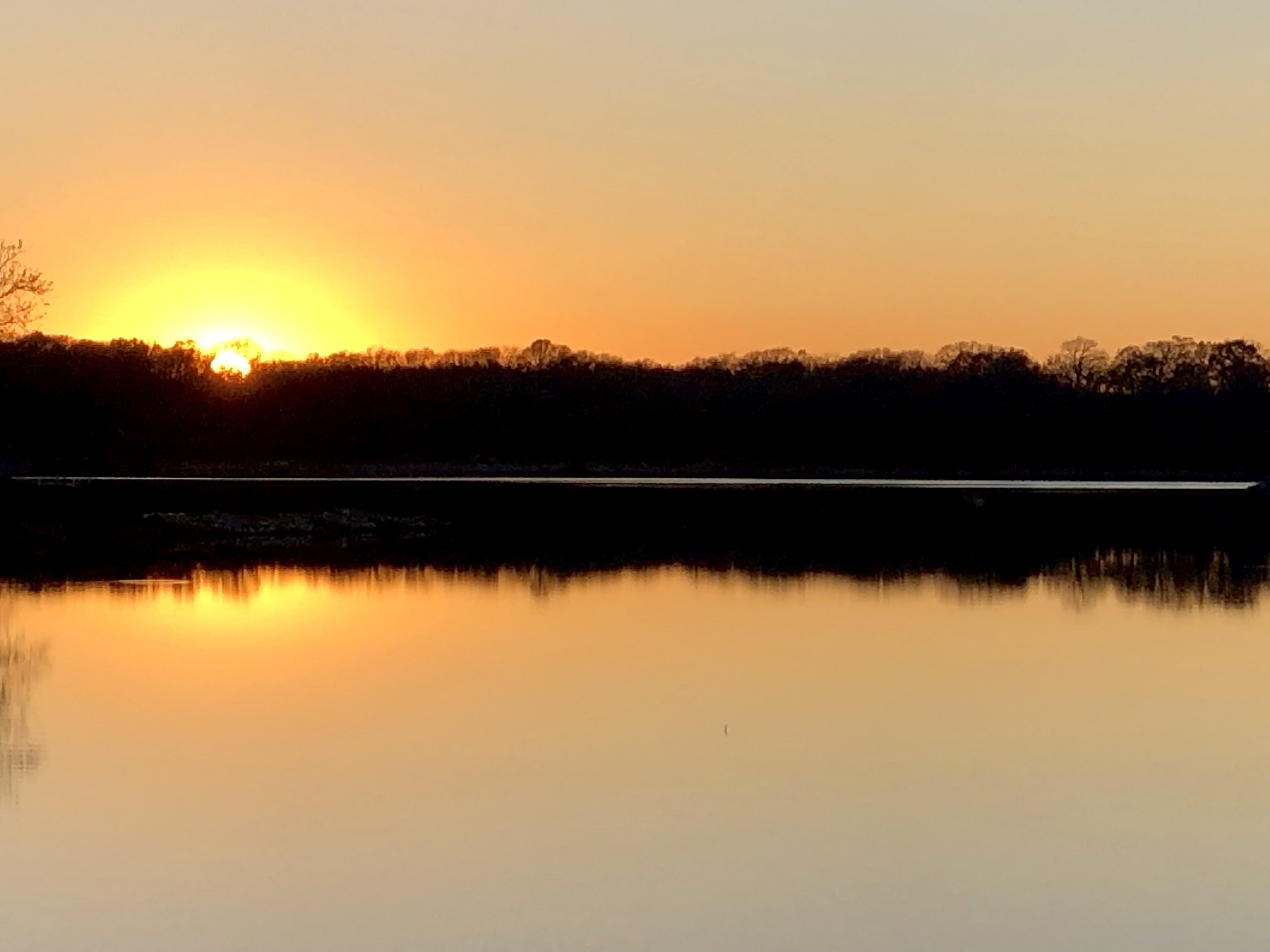 Down a little road was an area with about 5 campsites directly on a beautifully still lake. There was one other camper there, which worried me at first since I don’t like camping with just one other person. Then I thought about it. I decided that murders don’t set up camp. It takes way too much time, there are too many opportunities for someone to see you, and it seems like a murderer would want to be stealthy.  Not start a camp fire and cook a nice Dutch oven meal first.  The people you need to be worried about are those that come to the campground and circle but don’t park and don’t setup camp. 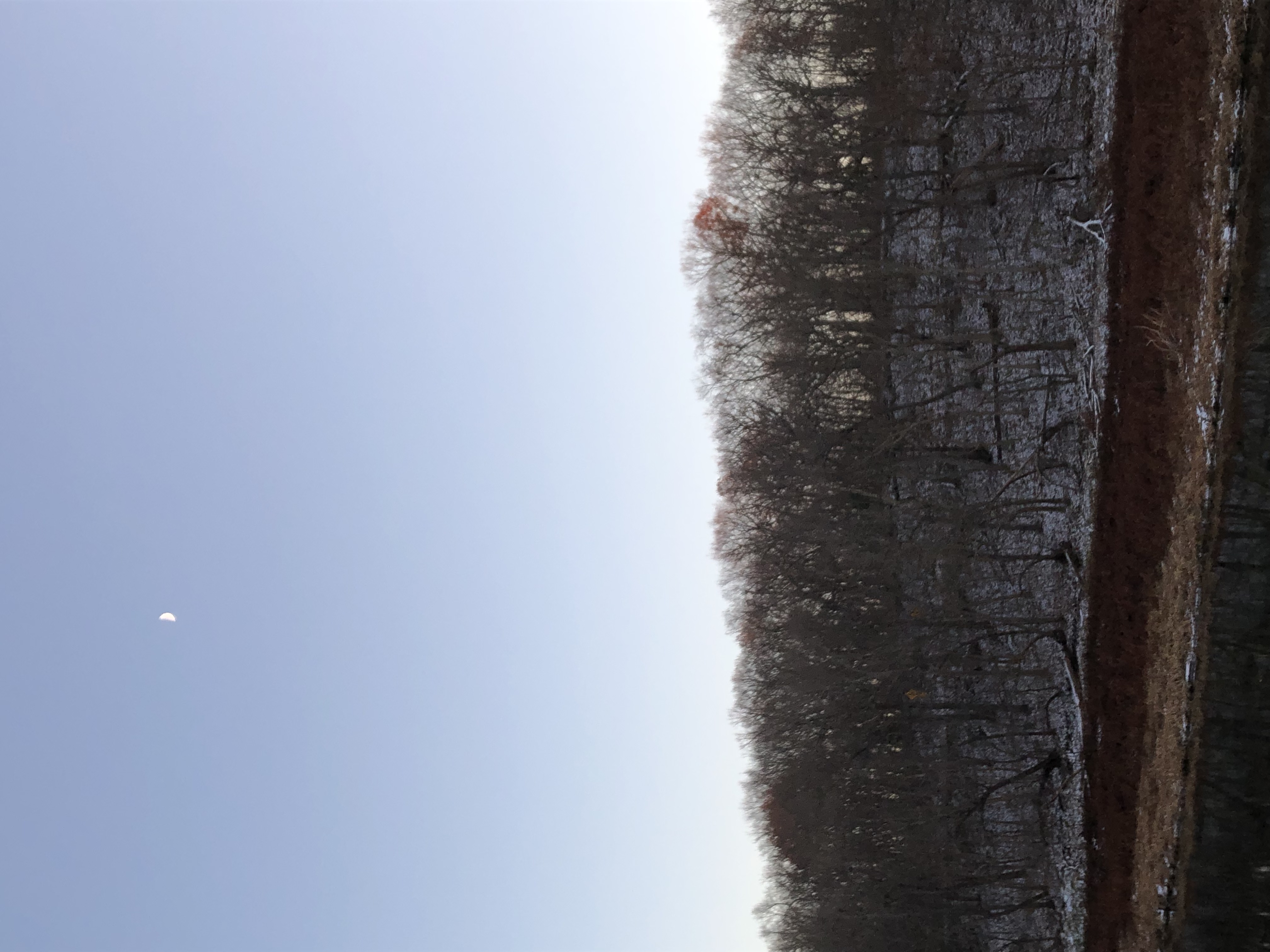 So with my mind at ease, Dingo and I parked and soaked up this amazing spot! It was early enough that we could sit and watch the sunset. I could finally catch up on my writing, Dingo could run and catch the frisbee a few dozen times, and I could make some dinner. Google definitely redeemed itself by directing me to this location. 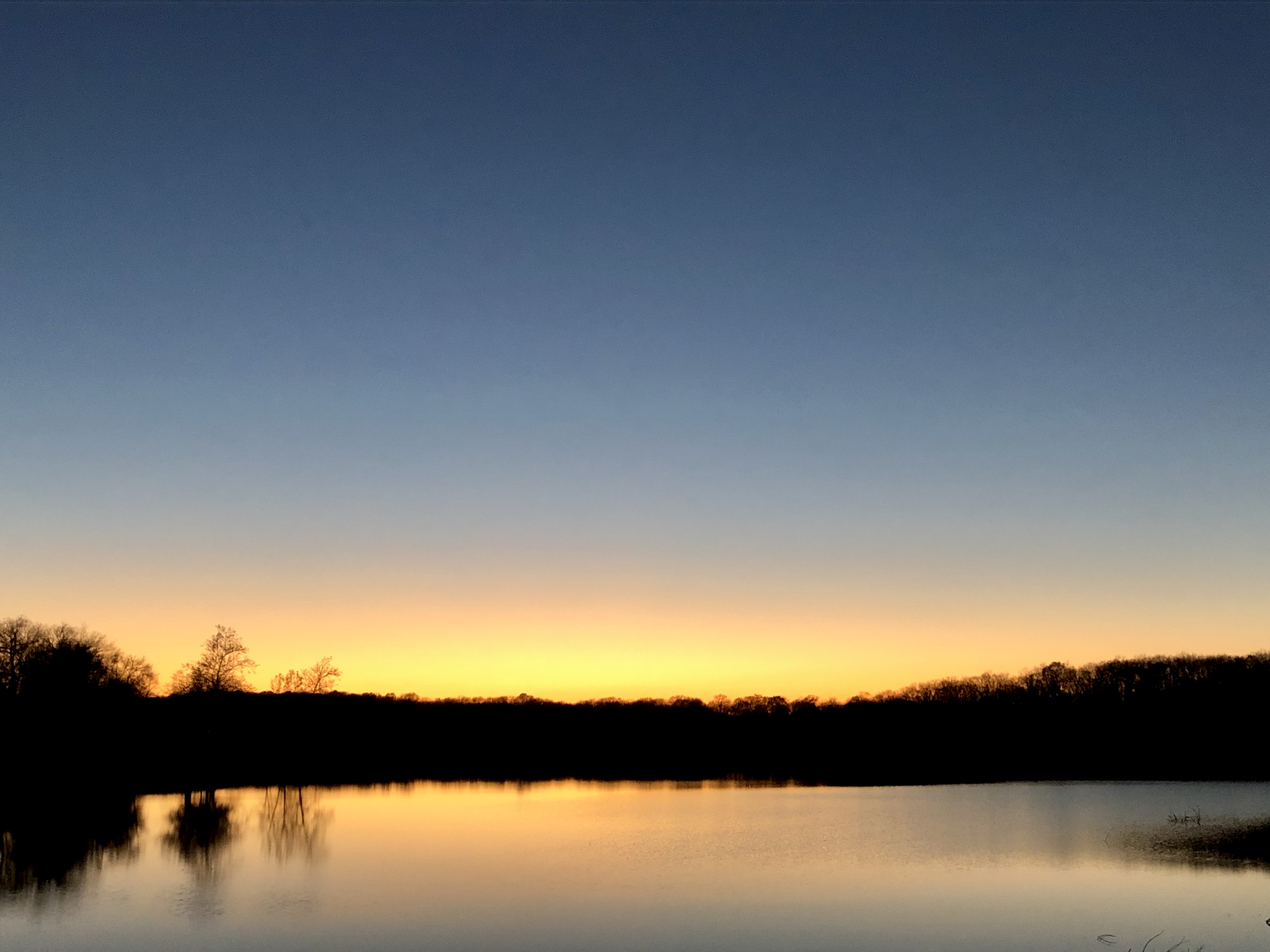 While I could see staying here another night, it’s still freezing cold, and I’m still on the hunt for someplace warm where Dingo and I can hike and not have to sleep in a hat. So off towards Colorado in the morning, bright and early!