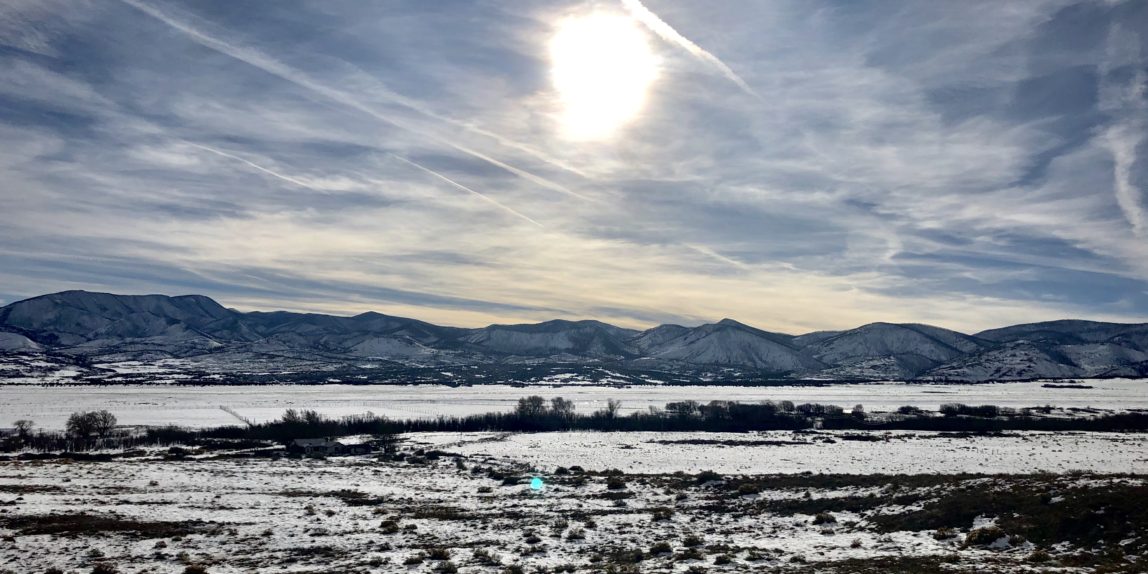 Today’s journey is brought to you by “the fastest way to get from point A to point B.” Apparently Google Maps really prides itself on this methodology, which frankly, I’m fully supportive of. Today, while allowing Google to be my navigator, I took a journey! No, actually, it was more like an exploration. I was a pioneer like Emilia Earhart (just without the plane and tragic ending). The point is, I didn’t just hop on the interstate. No, I made my way across Kansas, over the Rocky Mountains and into to Colorado entirely on country roads. 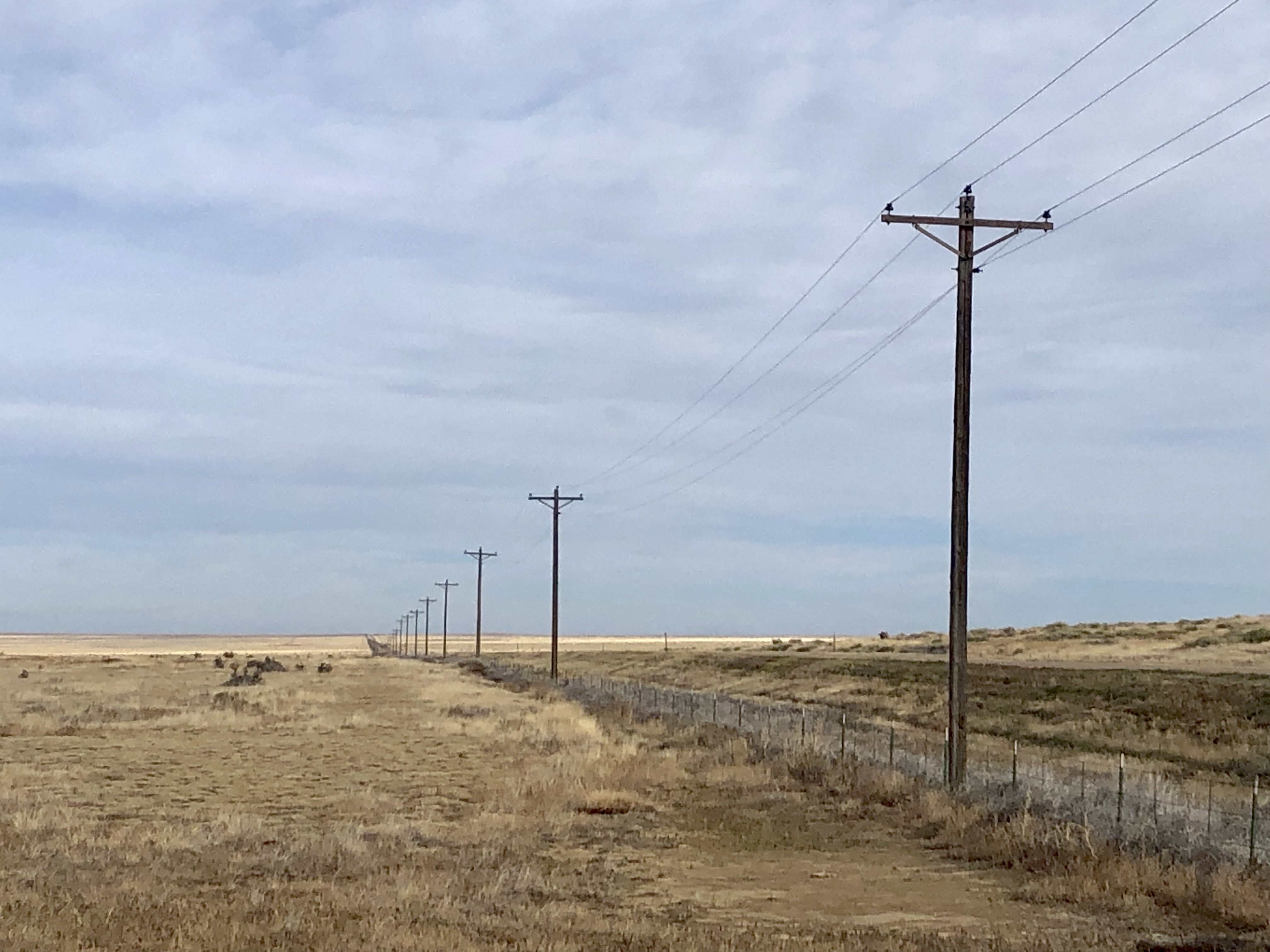 This morning began as the last couple have. Waking warm and cozy inside a frosty teardrop. Making coffee and breakfast and hitting the road early. I’m not sure what I was thinking beyond “get me the hell out of Kansas,” but I carelessly hopped on that afore mentioned interstate without first consulting Google Maps.

The universe, however, had different plans for my day, so about 15 minutes into the trip I got a call from someone in Kansas. “Well, that’s unusual” I thought to myself. My curiosity trumped my habit of ignoring all calls, and I’m glad that it did. The woman that ran the RV Park informed me that I left my tire blocks at the park. This whole RV’ing thing comes with so many accessories it’s honestly hard to keep tabs on all of them.

While I wasn’t particularly keen on backtracking, I was only 15 minutes out so I turned around. I collected the blocks and realized I hadn’t consulted Google for my navigation. I put in my destination and found that I was heading in the completely wrong direction! I typically have a keen sense of direction, so I was surprised at my folly, but I trusted Google to not lead me astray.

My route took me from where I was to a small two lane country road that wove its way through Kansas. That little two lane led to another little two lane that took me into Colorado. Getting off the Interstate was the best gift Google could have given me. There were multiple points throughout this drive where I was filled with awe!

In some cases that awe came from seeing some enormous dilapidated structure that was so large you could see it on the horizon from miles away, and that was so strange it looked like some beast that was waiting for its next human sacrifice. 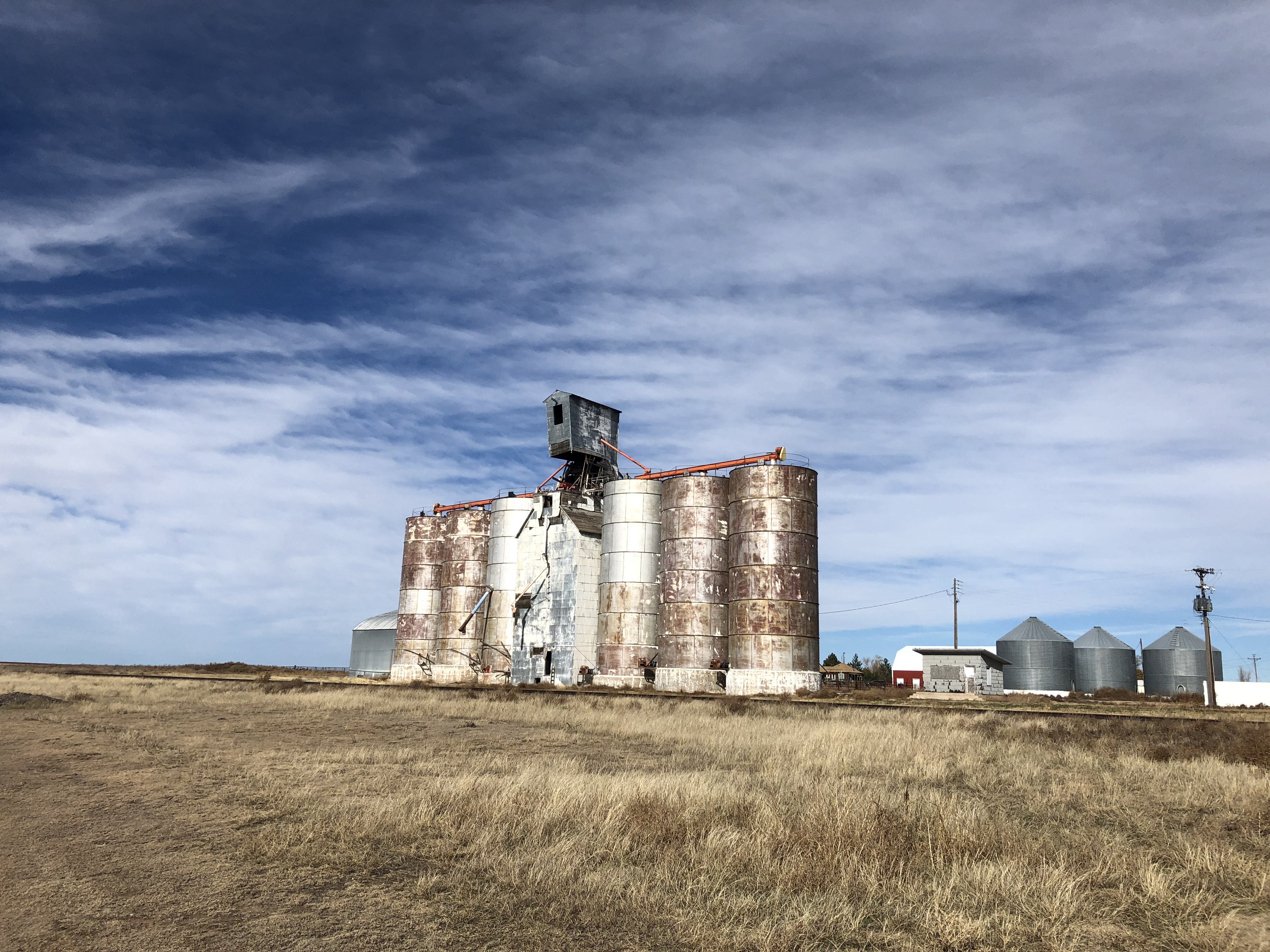 In other cases that moment of awe came from entering into the ranch lands of Colorado. Seeing the high golden grass moving with the waves of wind, or seeing the fences so dense with tumbleweeds that they looked to be made of stone. 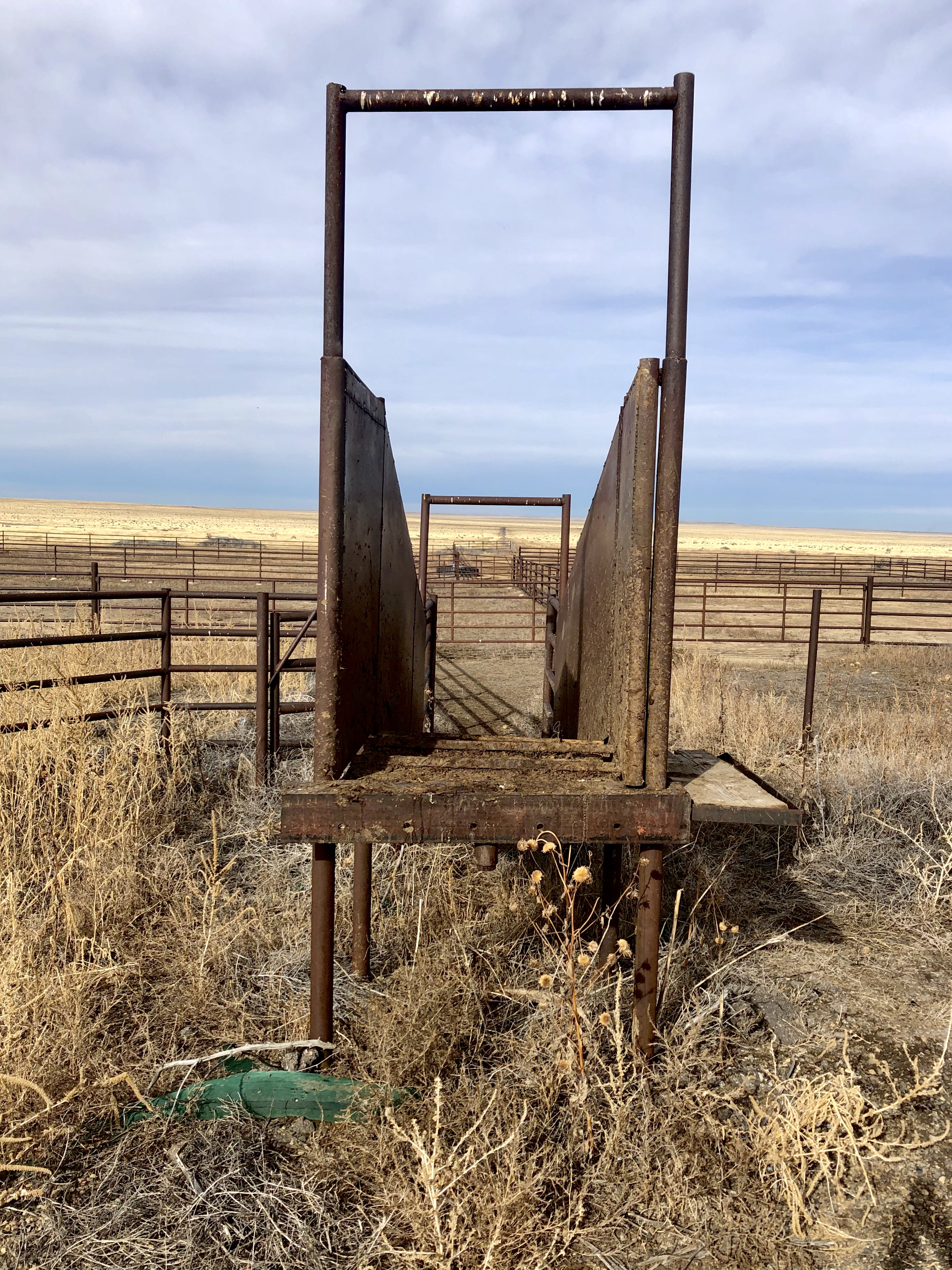 This journey took me through numerous small villages, most with what looked to be a population of about 100. While not awe inspiring, seeing the multitude of American flags hung on everything from homes, to businesses, to abandoned buildings, gave me a sense of pride. For just as much ugliness and frustration one can find in this country there is breathtaking beauty. This part of America really loves America, and I love them for it. 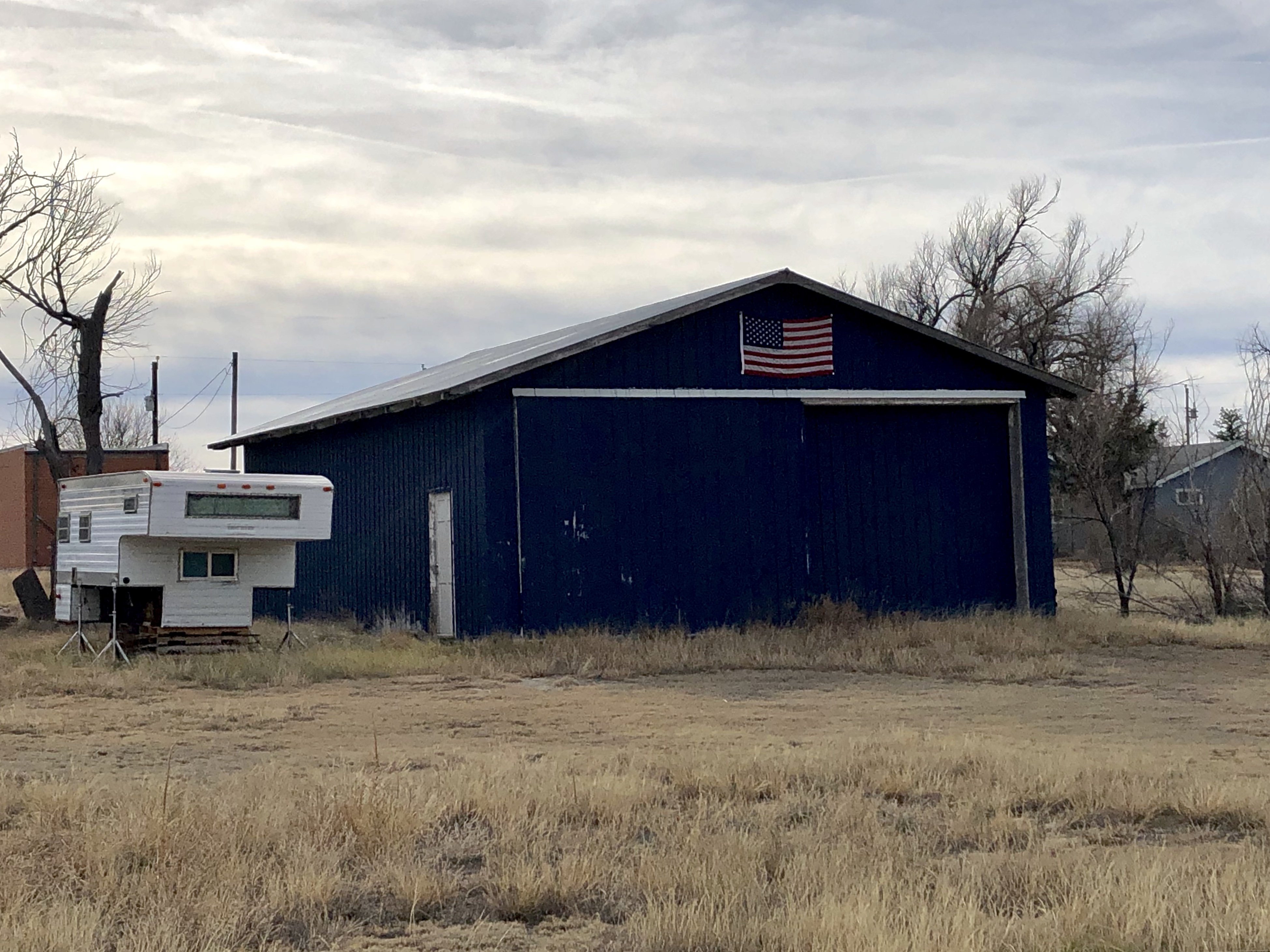 So as I continued through the countryside, stopping at vintage gas stations to fill up, and periodically pulling over to snap a picture, something began to take shape on the horizon. 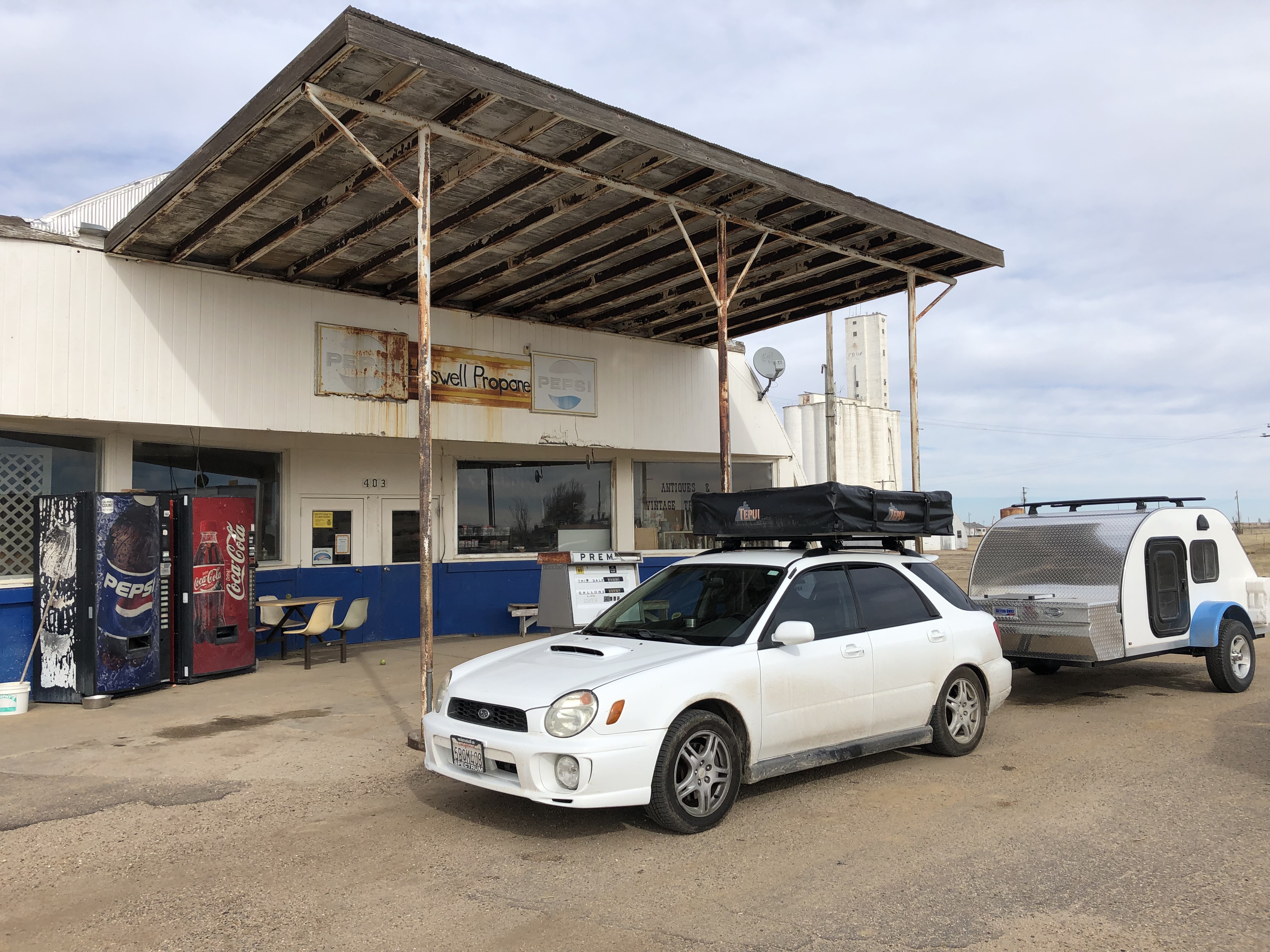 I’ve been staring so long at open prairie, that I thought my eyes were playing tricks on me. It must be clouds, or some sort of optical illusion. My car dipped down a hill and then rose back up to find the magnificent Rocky Mountains. They stood in front me me like a jagged toothed wall, breaking the monotony with such force that I was left astounded. It seemed impossible that these enormous mountains could have been hiding below the horizon all this time. 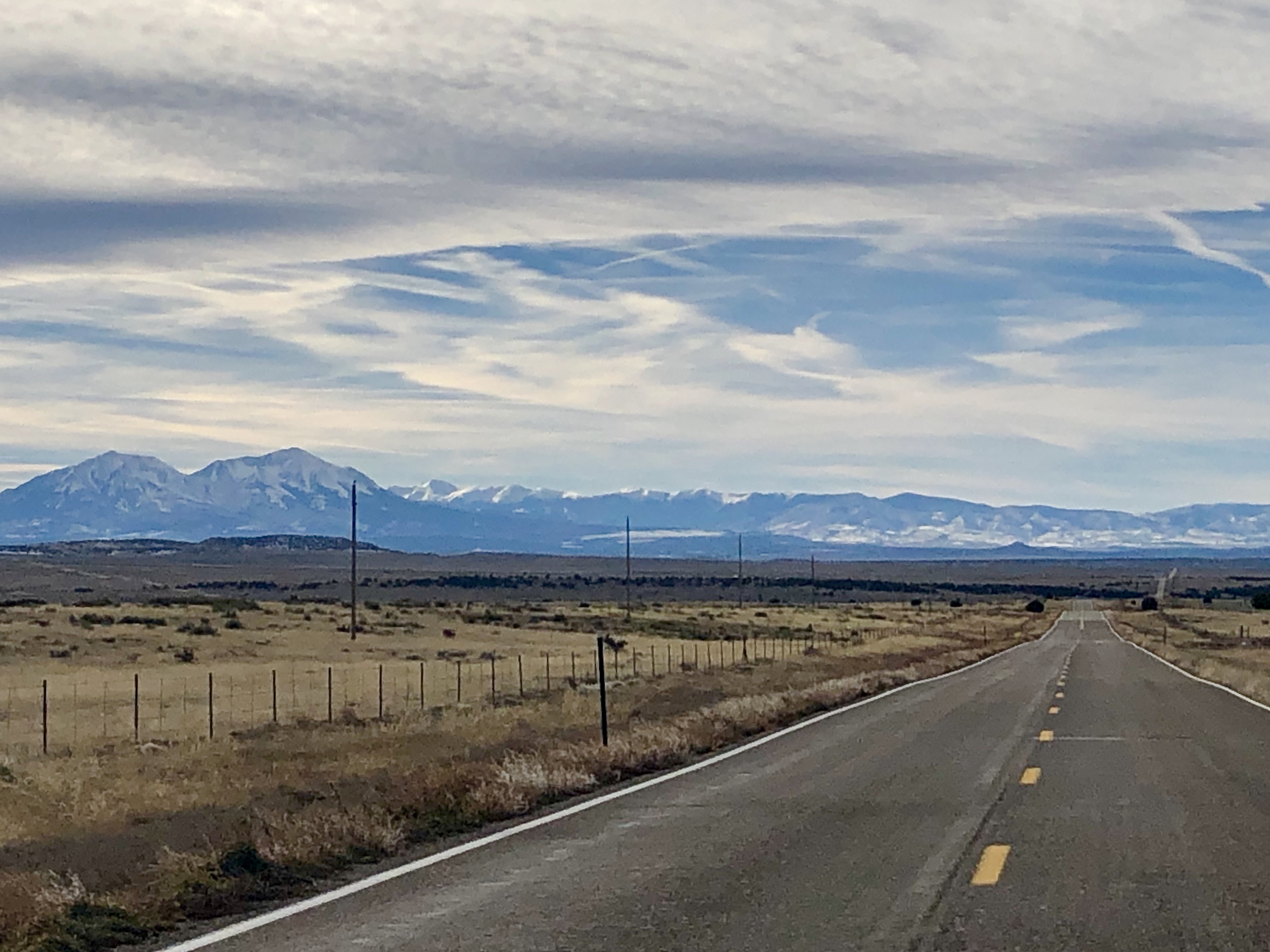 As they drew closer, the snowy peeks and dark clouds became more apparent. I considered stopping for the night and getting a hotel, but I just couldn’t. This day had been filled with so many monumental sights I had to see what came next. 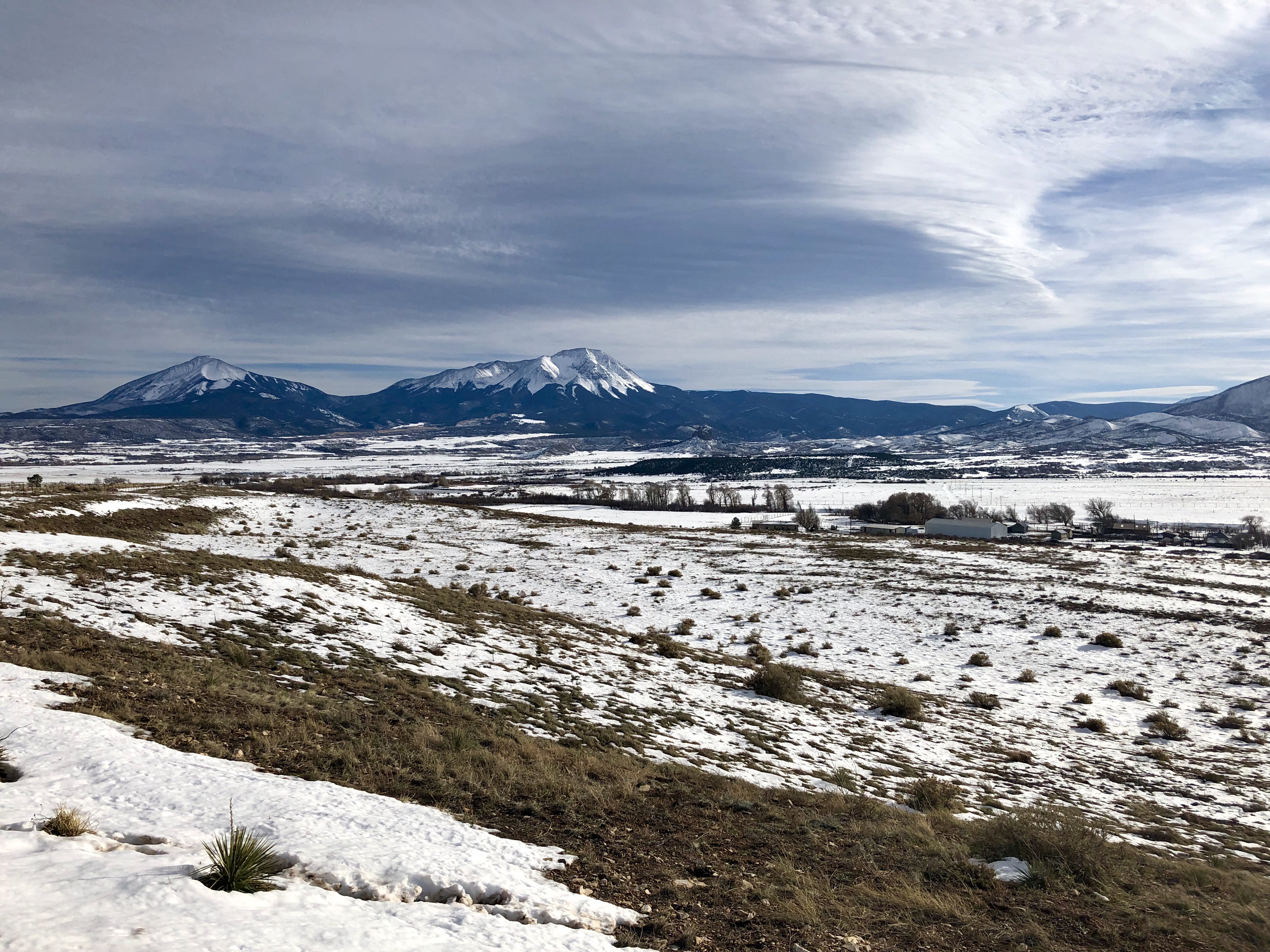 I pointed my car up those mountains and into the cold, wondering if I’d made a terrible mistake. I am still searching for a warm place to camp after all. Surprisingly, just as quickly as my car rose to the summit of the mountain, it began to drop into a valley. I’m so used to mountains being so wide it takes hours to cross them. I had only been driving 30 minutes and I was over the hump.  I was just outside Sand Dunes National Park, so my campground should be just around the corner. 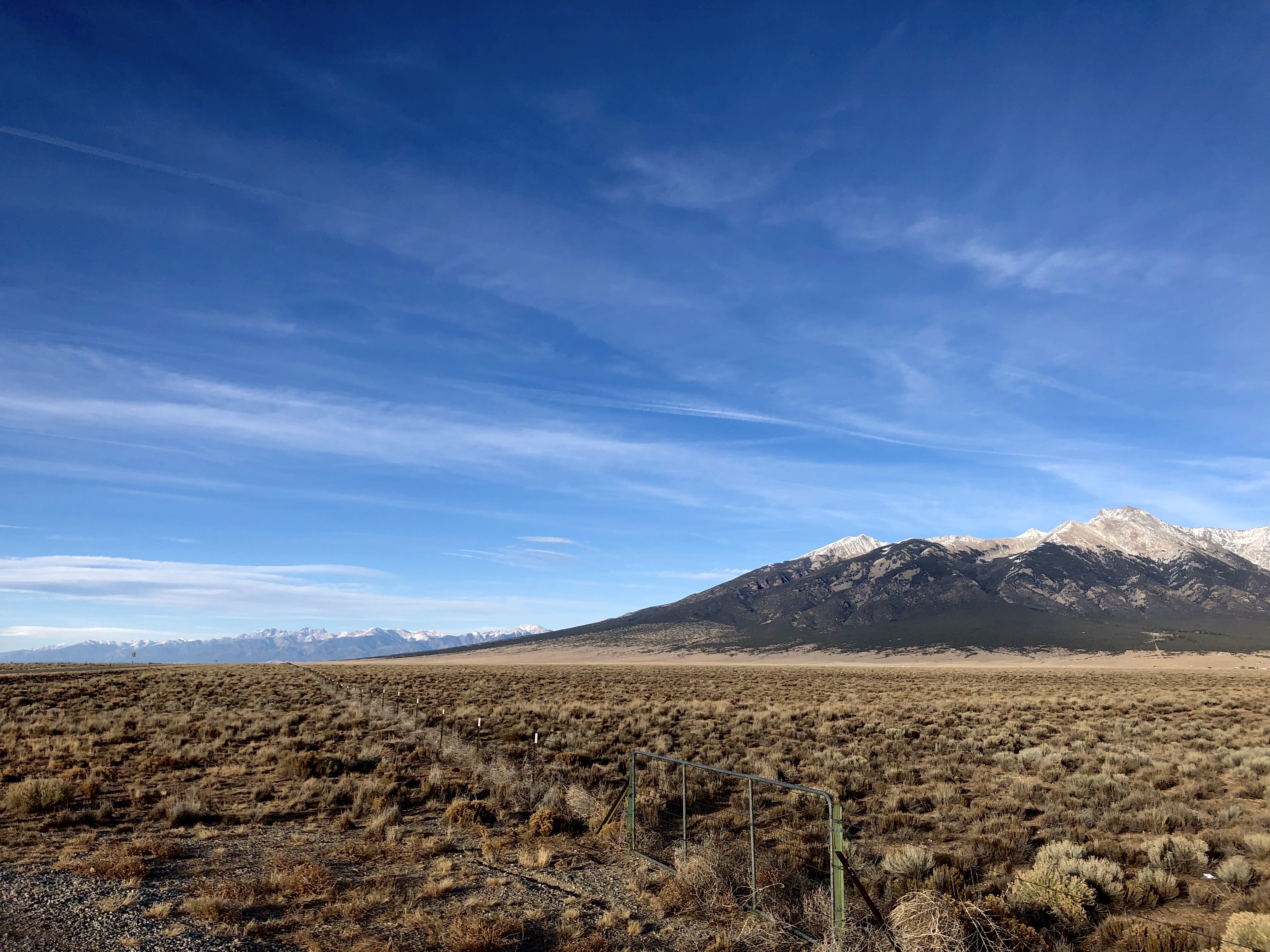 I consulted Google Maps and I had just 6 miles to go to my campground! Something was off, though. Google said it was going to take me 45 minutes to get there. How could it take that long to go 6 miles? 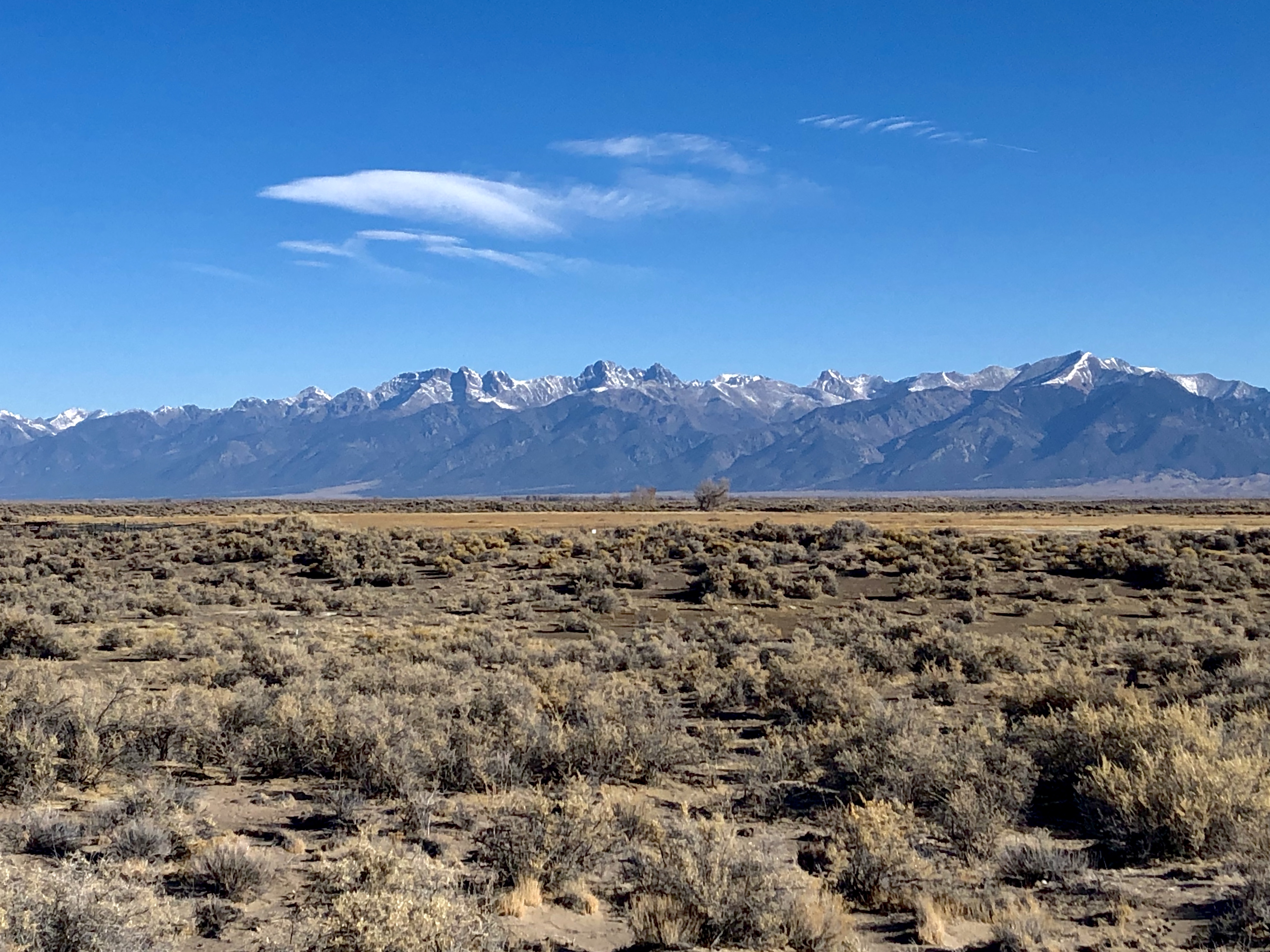 I have to say I doubted Google, but I won’t do that again. I’ve learned my lesson. You know how it could take 45 minutes to go 6 miles? It could take that long if the road is made up of bowling ball sized boulders you have to climb over. I gave it a mile before I turned around. My car could have done it, my trailer could have done it, but my car and my trailer together seemed like a bad idea.

So now what? My options were just as limited as the amount of light left in the day.

I drove up the road to the next campground, closed. I drove to the campground after that, closed. It was starting to get dark, I was in the middle of no where, and my only option looked to be the equivalent of driving my car up a landslide.

With 1 minute before closing, I ran into the visitors center at Sand Dunes National Park. The park ranger’s eyes said “ug, I knew I should have locked the door,” but thankfully his innate desire to be helpful took over and he directed me to the San Luis State Wildlife Area. It was 15 miles away, and didn’t require mountain climbing gear to get to! Perfect!

Dingo and I hopped in the car and made our way to the San Luis State Wildlife area, arriving just in time to catch the very tail end of the sunset. 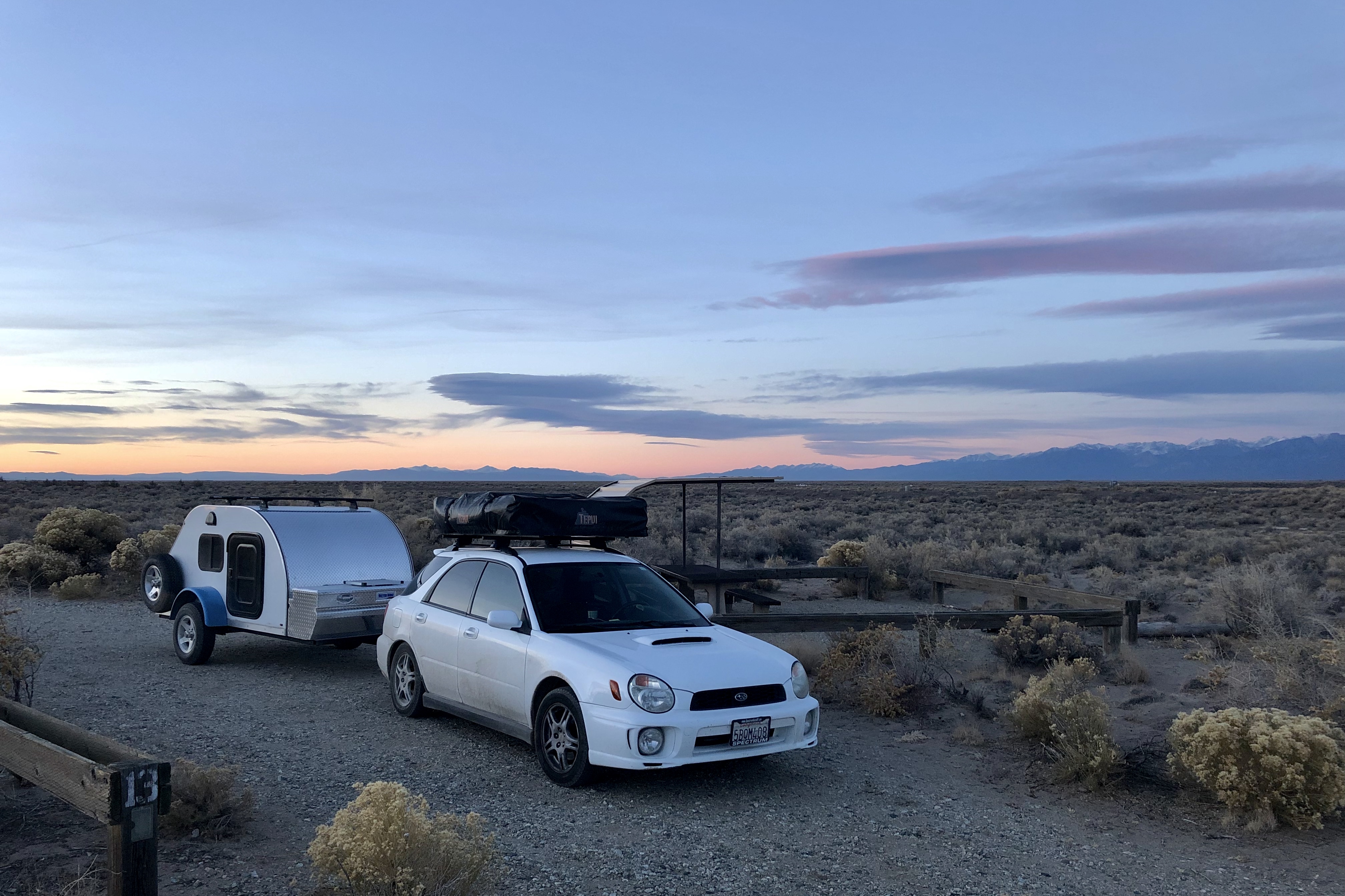 It was cold, but not so cold I couldn’t cook Dutch oven pizza! With a warm pizza in my belly, a warm trailer to retire too, and a day of breathtaking sights filling my head I consider it a successful day!

Tomorrow’s destination is only an hour away, but given the trend, I suspect the trip will take an unusual turn.

In closing, let me leave you with this image.  In case you were wondering why I don’t post more pictures of Dingo and me together, this is the sort of thing that happens every time I attempt to take a selfie with Dingo: 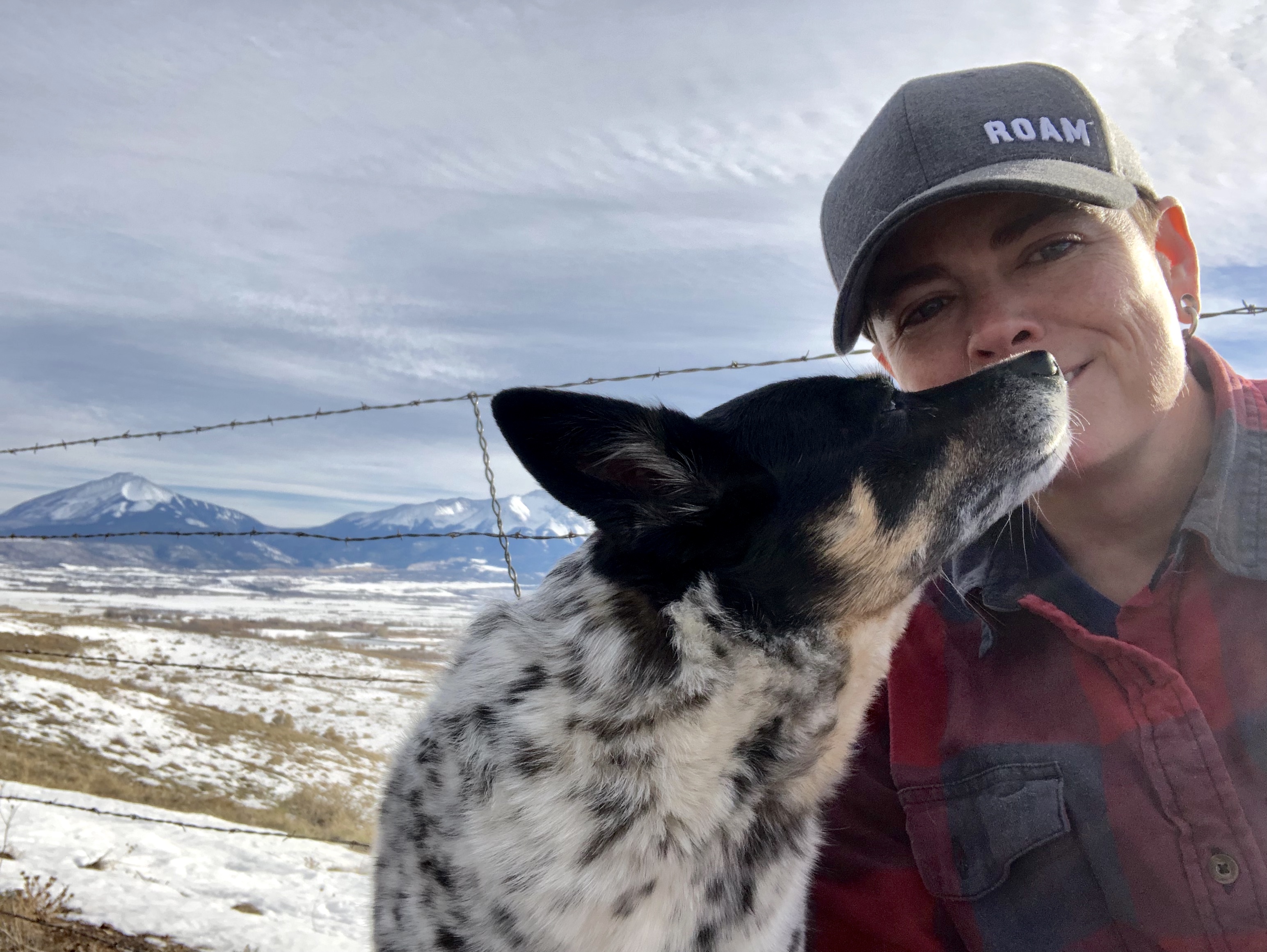